At the dinner, this letter of tribute was shared to thank Father Nick for his vision and service over these many years:

I hope this letter finds you well. I am writing to you today to thank you for your many years of service to Mass of the Air. I speculate that your intention in starting Mass of the Air was to reach those devoted Catholics that were physically unable to attend Sunday Mass. I wanted to let you know how far beyond this your service has gone.

In 1989 my husband and I were blessed with a 1lb 15 oz son. We fully believe that he is with us today due to the will of God.  When Brent was 4 years old, it was determined that he had autism. It took us a few years, but we finally came to realize that autism was not a challenge God was asking us to undertake but a blessing he was asking us to receive. Seeing the world through Brent’s eyes has given our family a whole new sense of spirituality. 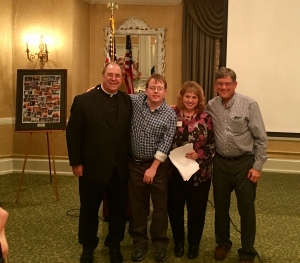 Father Nick Rice and the Bertrand Family at the dinner honoring Father Rice.

As lifelong educated, practicing Catholics, my husband and I assumed we would attend weekly church as a family and that our children would attend Catholic schools.  Despite many years of trying through the yelling out and tantrums we soon realized that Mass was not a comfortable place for Brent to be.  We realized that although Brent could not worship in a church building, he seemed to have a need for God. We answered daily repetitive questions about God and Jesus and were amazed by his spiritual want.  At this time, we were taking our small daughter to church, but knew we needed something for our son. This is when we discovered Mass of the Air. Sitting at home in his pajamas in front of the television, Brent was drawn to your program. We were amazed how quickly he picked up what he was to say in response.  My husband and I have both received great pleasure in worshiping this way with our son. In participating in the Mass he exudes a joyfulness that is contagious.  Brent seemed to instinctively know when it was Sunday and would ask, “Is it time to praise the Lord yet?”

Fast forward many years, and our son never missed a Sunday with Mass of the Air. He knows every word he is to respond and most of the words the priest says. A few years back when the Church changed several of the congregational responses my thoughts went to Brent and how long it would take him to catch up. I relayed my concerns in passing to a fellow parishioner at our church Saint Bernard. Several nights later he came to my home and in his hand was a laminated copy of the changes that we used at Saint Bernard. I jokingly ask him if he had “snuck” that out of the church building last Sunday. He smiled and responded, “it’s on loan.” I didn’t have the heart to tell him that Brent could not read. But this friend was smarter that I was, for as I read the responses out loud to Brent during Mass of the Air, he caught on faster than I did.

As Brent’s little sister Emily progressed through Catholic schools, I tried not to ponder too long on the wonderful sacraments that she was receiving, that he would never be able to receive. I knew that God had his own blessings for Brent. Almost two years ago we began the planning for our Emily’s Catholic wedding. I did not even dare to dream that Brent would be there and began to make plans for someone to stay with him and to bring him to the reception later. Emily’s wedding was to be at Saint Agnes – a church that has meaning both to her and to our son-in-law to be, Joe.

Out of the blue one day Brent asked if he would be attending his sister’s wedding.  We decided to give church a try and took him to Saint Agnes for Mass on a Saturday evening. The entire way to Mass we talked about the promise of a cheeseburger (his favorite) afterwards if he cooperated. I cried throughout most of the Mass. He never made a sound except to joyfully praise the Lord when he was supposed to. He asked me to open the hymnal for each hymn, even though he doesn’t read, and I was astounded at how many of the words he could sing from Mass of the Air. I have the grace of God, and you Father Rice, to thank for that night.  And, yes, Brent did get his cheeseburger, a double.

The next Sunday for the first time in many years we attended Mass at Bernard as a whole family. My husband and I were overwhelmed with joy; it felt like home.  Might I add that Brent’s only difficulty at Mass now is that he is one line ahead of the rest of the congregation.  I often see Father Bob Stuempel smiling at the altar when he hears Brent ahead of the congregation, or when Brent is trying to steal his lines. Brent prays loudly and with such a joyful heart that I often wish I could be so bold.

As if reading my mind, Father Bob asked me after church one Sunday when I thought Brent could make his First Communion. This was a distant dream of mine, but I explained to Father that I had too much on my plate planning Emily’s wedding.  I began to make plans to have Brent seated in the back of church at his sister’s wedding with a family member. In the event that Brent got over whelmed, there was an escape plan and the route to the closest McDonalds was routed.  In a perfect world Brent would have stood at the altar with his sister when she became Joe’s wife, but we knew this was not possible. Emily, however, was determined to make Brent part of her big day. She approached me one day and said that it would mean so much to her and Joe if Brent could make his First Communion at their wedding. She spoke to Father Bob (who was to perform the ceremony), and plans were made. The wonderful Connie Tobbe from Saint Bernard did a simplified First Communion prep with Brent. Each Sunday after that, Brent would walk with me to Communion and practiced his bow and his response.

On October 24 of 2015, my husband and I watched our beautiful daughter marry our wonderful son-in-law.  I stood as the other Communion Minster and faced my 27 year old son as Father Bob presented him with his First Holy Communion. I am can assure you there was not dry eye to be found as a round of thunderous applause rang through the church. I asked Brent the next day what his favorite part of the wedding was. He never hesitated with his response and said “My First Communion.”  Believe it or not in the craziness of this day, I thought of you Father Rice. Not in the sense that I even knew that Father Nicholas Rice was the creator of Mass of the Air, but in the sense that I knew that it was you who had helped to get us to this day.  It was through your contribution to our faith that my Brent was able to more fully know God and to be present at his sister’s wedding.  My daughter’s wedding day was made perfect because in her words, “Brent was with her.”

But the list goes on and on. We are now able to attend weekly Mass as a family. We have been asked to take the gifts up as a family, and Brent was so very proud of himself.  My son is now able to receive Holy Communion with his father and I. He always receives Communion right before I do because sometimes I have to remind him to say amen.  After he receives, he  often turns to me and gives me a thumbs-up. I can’t help thinking this makes God smile.  It’s been 18 months now, and Brent attends church every Sunday.  We have moved beyond cheeseburgers, and now Brent will ask for a one dollar bill after Mass because he says, “I was good. “ I think the Lord would agree that Brent has earned those dollars.

When I read in The Record that you were retiring from your position I knew that I had to thank you. So thank you Father Rice. Thank you from the bottom of this mother’s heart. Thank you for giving our family the ability to attend church together. Thank you for giving to us a format to allow my son to practice his church skills. Thank you for making it possible for us to be a whole family on the most special day of my daughter’s wedding. Most importantly, thank you for bringing the Lord to my son in a way his father and I so desperately wanted for him.

I’ve no doubt the Lord would say “Well done Brent, and well done Nicholas Rice. I am well pleased.”  May God bless you as much as you have blessed others.

I initially set out to let Father Rice know how much his service has meant to our family. But I can’t let this opportunity go without thanking his entire supporting cast.

To the other priests and deacons who have given their time over the years to make Mass come alive for Brent, we want to say thank you. Without your participation Father Rice would have never been able to fulfill his dream.  For many years now you have been Brent’s pastors and his home parish.

To the musicians and the vocalists, we want to express our gratitude.  It is because of you, each Sunday, that Brent will now ask me to open the hymnal to each and every song. Although he doesn’t read, he has an amazing retention for the hymns he has heard you sing.  He sings them with joy, and I marvel at how he remembers the words that I can’t.  Lori Cody probably doesn’t realize this, but she was chosen as a soloist at Brent’s sister wedding because of Mass of the air. We have sung alongside Lori for many years on Mass of the Air and were so thrilled to hear her at St. Agnes. One Sunday when we attended Mass at St Agnes, my daughter and I both recognized her voice from Mass of the Air. My daughter said “Mom I have always loved her voice, can we ask her to sing at my wedding?” I knew Lori’s voice would make a beautiful contribution to my daughter’s wedding, but thinking as I do, as the mother of an autistic son, my thoughts also were that Lori’s presence at the wedding would give Brent another familiar face and a calming familiar voice for him during the ceremony. So thank you to each and every one of you for teaching my son that music is one of the best ways to praise the Lord.

To the beautiful ladies who have taught Brent that even those who can’t hear can know the word of God through sign language, thank you for your contributions.   I have always thought sign language to be very beautiful. I must confess that on more than one occasion, I have been caught up more in the signing interpretation of the Mass than in the spoken words.

To the camera specialist and the audio specialist, the production managers, and all those behind the scenes, it is your contributions that brought the Mass to us in a format that worked for Brent. We will be forever grateful for your talents.