The Spirit of St. Francis at the Franciscan Kitchen

Home/Archbishop's Blog/The Spirit of St. Francis at the Franciscan Kitchen

The Spirit of St. Francis at the Franciscan Kitchen

Yesterday, I walked over to Franciscan Kitchen, on Preston Street just two blocks from the archdiocesan Chancery. It was a joy to serve along with dedicated adults and young from our Catholic high schools. (Sacred Heart Academy and Trinity High School were represented.) 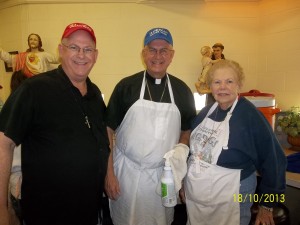 Archbishop Kurtz with Chuck Mattingly and Chuck’s Mother at the Franciscan Kitchen.

From 10:30 a.m. to 12:30 p.m., the doors were opened and about 450 men, women, and children entered for a meal – prepared by great cooks – and an atmosphere that would have made St. Francis of Assisi proud. Surrounded by the spirit of Jesus, the atmosphere oozed a sense of dignity. Manager Chuck Mattingly gathered us for prayer before we began, and Franciscan Brother Ambrose led it. Intentions from those serving were mentioned, and the doors opened. For the next two hours everyone had a proper role. Mine, like the last time I was there, was to clean off the oilcloth tables after someone has finished eating, and in the process, to have conversations with the patrons. Nothing was pushy or preachy but rather warm and inviting, and everyone seemed to fit in well. Every twenty minutes or so, Brother Ambrose rang a bell and led us all in the Lord’s Prayer. Hats came off, and silence entered the dining room as many of us prayed aloud.

The Franciscan Kitchen, formerly called the Franciscan Shelter House, has been a beacon in Louisville since 1980. Brother James Fields, O.F.M. Conv.,  followed the inspiration of the Lord Jesus that year and began serving those who were hungry and often homeless. I believe seven people came that first day. In 2000, the first building was torn down, and the present one was built. Board members told me that an expansion is on the horizon. Providing meals for 400 to 500 people daily is no small task, and every inch is currently being used. I’m told that this expansion is being supported by donations and even remembrance in wills by loving supporters.

I was welcomed so warmly by Chuck Mattingly. Above, is a photo of me with him and his dear mother, who faithfully volunteers. Chuck is the operations manager and does a great job. So do the regular core volunteers, including Brother Ambrose.

Here is the Mission Statement, which states so well the spirit and ministry of the Franciscan Kitchen: “In the tradition of St. Francis, which recognizes we are all brothers and sisters, we are dedicated to providing for the nourishment of God’s family. We will maintain an environment of trust and fellowship to build mutual respect and beneficial relationship with our guests, co-workers, suppliers and community. These efforts will strengthen our organization and enable us to provide a much needed service to our community. Jesus is the hungry … to be fed; Jesus is the naked …. to be clothed; Jesus is the lonely … to be loved. “

This mission flows through the walls of the Franciscan Kitchen and into the hearts of all who enter. If you want to find out more, call 502-589-0140 or email: fsh748@aol.com