Last week we paused during the penitential days of Lent to celebrate some March feast days. Of course, who does not know of St. Patrick?  Parades and Irish heritage abound.  In Louisville those members of the Ancient Order of Hibernians have always been well prepared to display not only their heritage but a Catholic faith that sustains them.  I give them three cheers! 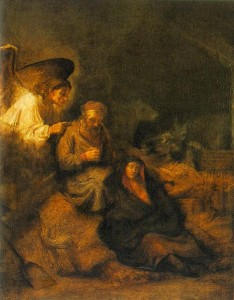 With more silence, we celebrated the feast of my namesake – Joseph – on March 19.

Each year, this feast is a mini-retreat for me. In 1972, I was ordained a priest on March 18 and celebrated a Mass of Thanksgiving on the 19th.  That year as I celebrated what we used to call “my first Mass,” I had my patron on my mind, and each year it is wonderful to celebrate and remember these double occasions of joy.

I recall my mother telling me that I had uncles on both my dad’s and mom’s family with the name of Joseph.  Both died before I was born, so I knew them only by reputation. In both cases, they had a great reputation.

When I have Confirmations, names get my attention.  There is, of course, the baptismal name of the young teen being confirmed and then the name they choose.  In their letters to me, the young people always mention their reason for choosing a name, and I enjoy reading what got their attention and why they choose the names.  Some have my situation.  An uncle or aunt or some other family member has this name, and the family rightly desires that it continue.  The students then learn about the saint that inspired this name from a Google search, which I think is such an occasion for grace.

Though before the days of Google, I learned in elementary school about St. Joseph, that quiet and strong, faithful, and open-to-God’s-plan man who had a life filled with dreams and uncertainty.  Decision-making was central in his life as he cared for the Holy Family, and, thanks to his penchant for following the advice and direction of God’s messengers, he always seemed to come out well.

I would have loved to hear his voice!  Sadly we don’t even get a good quote of his from all of the New Testament, but rather read about his consistent and faithful decisions.

His Old Testament counterpart was the youngest son of 12 – the 12 sons of Jacob who in turn formed tribes that would comprise ancient Israel, the chosen people.  Joseph was not appreciated by his brothers, and Genesis tells of his being thrown into a ditch for dead, rescued by a merchant on camels, and taken to Egypt.  He did well in cooperating with God’s will, however, and rose to prominence.  Though he would have had every reason to be a little cool to his brothers who had forsaken him, he becomes a prefigurement of our Savior Jesus by taking care of the famine-stricken and desperate brothers who wander to Egypt for help.

I recently read in the book of Exodus (13:19) that Moses, in leaving Egypt, took with him the bones of Joseph to fulfill the oath Joseph asked of the Israelites that his bones be laid to rest in the Promised Land.  How key would be the presence of the patriarch Joseph as salvation history unfolds in the Promised Land.

I wonder if St. Joseph was told of the one whose name he bore.  I bet he was.  I can imagine that the God-fearing Joseph was as well-schooled in Scripture as in carpentry.

St. Joseph surely learned from his parents and his rabbi of Joseph, who rose to prominence in exile and rescued his people when famine drove them to Egypt. He must have prayed that when his time came that he would also be as strong for those entrusted to his care … never realizing that his charge would be the Son of God and His mother Mary.

Pope Francis calls new evangelizers (that is us) to be attractive witnesses to the faith.  That is exactly what the saints are.  For St. Joseph, his attractive witness showed forth his gifts: being strong and thoughtful, quiet and resourceful, and overflowing with humility.  We will have the example of two modern saints, John XXIII and John Paul II, as such attractive witnesses after their canonizations in one month.

Lent is a great time for us to seek out the example of the saint for whom we are named.  With the Internet at our finger tips, it is so easy to be inspired!