The Gift of Consecrated Life

The Gift of Consecrated Life

September of 1955 seems so long ago. During this year, as I entered fourth grade, I went to St. Canicus School in the small coal town of Mahanoy City and met the Grey Nuns of the Sacred Heart for the first time. My little parish school of St. Mary had closed its doors because of dwindling enrollment, and I and my nine classmates had to find a new school home. 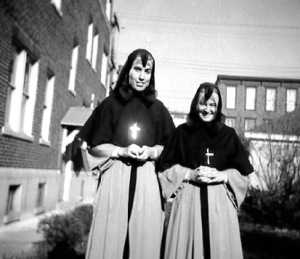 It was great to remember those elementary school days as we celebrated Catholic School Week late last month. One reason the memories remain so fresh is because I keep in touch with some classmates who remain good friends and, even more, I still write and visit with a Grey Nun who was the principal and seventh grade teacher: Sister Mary Denis Woods, GNSH. She and her natural sister both served as women religious in our little school and had a great impact on my life and likely on the vocation decisions of countless classmates. In fact, when my classmate throughout grade school, high school, and seminary, Msgr. Bob Wargo, and I were looking for a list of classmates, guess who had it? Sr. Mary Denis. If you want to find out more about the Grey Nuns and St. Canicus School, go here.

It is good for us to recall the great influence of women religious – those who dedicate their lives to following Jesus by living in community with vows of poverty, chastity and obedience – for I am finding that it is the rare Catholic who has not been positively influenced by someone from the consecrated life. It would be a good exercise for all of us to look on the Internet for the religious order who served us growing up or who serves us now.

Of course consecrated men and women continue to make contributions to the Church and to the larger society – through their prayer and ministries in the areas of education, health care, spiritual formation, social service, and so much more. I encourage you to pray for religious within our Archdiocese as well as those in the other forms of consecrated life, such as hermits, consecrated virgins, and secular institutes.

Earlier this month on February 2, the World Day for Consecrated Life was celebrated. In 1997, Pope John Paul II began this annual celebration, and on this day, we in Louisville have held a Mass honoring those women and men religious whose are celebrating special anniversaries. This year, I was in the Philippines as part of the effort to see the progress of the humanitarian efforts by Catholic Relief Services from the devastating Typhoon Haiyan that struck on November 8 of last year, and so I missed being at the Mass. I thank Fr. Mark Spalding, Vicar General, for presiding, and I sent my congratulations to those who were the honored guests. Each year I am amazed at the length of fidelity – in many cases, over 70 years and in one case a few years ago, 80 years as a sister. The rich heritage is best spoken by the witness of those whose lives and hearts were touched as these sisters served so many, so well. Though I was visiting on the other side of the globe, my heart was with those who gathered and all who were honored.

And lest you think that women and men of the consecrated life are a thing of the past, here are some facts from a 2013 study on those entering religious life compiled by CARA (Center for Applied Research in the Apostolate):

How great is the witness of sisters like my friend, Sister Mary Denis. Please pray for all those who have made commitments in the consecrated life and be sure to thank them. May they continue to be inspired by Jesus Christ and respond generously to God’s gift of their vocation.