Service and Faith – Two Sides of the Same Coin

Service and Faith – Two Sides of the Same Coin 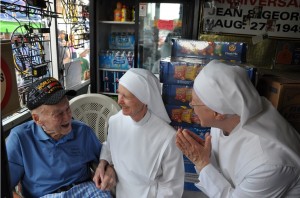 Little Sisters of the Poor in Louisville, Ky.

I recall visiting one of their nursing homes along with a group of seminarians for a Christmas party with the elderly residents of the home.  While I did not know the word “charism” at that time, I sensed something distinctive among the sisters and all who served in that home.  There was a unique and caring attitude that was almost in the air.

Later I came to know the word charism and how this applied to the Little Sisters of the Poor.   From its Greek roots, the word “charism” simply means “gift,” but it is a very special gift.  We use the word to denote a gift that comes from God to a person or group for the purpose of serving others.  The charism of the Little Sisters of the Poor is now more than 170 years old, and it traces back to Saint Jeanne Jugan.

I visited the web site of the Little Sisters and was treated to the history of their saintly foundress.  One sentence summarized her life well: “Jeanne Jugan gave herself entirely to God and the elderly poor.”  Despite personal struggles throughout her life, St. Jeanne kept her eyes on God in prayer and on the elderly poor in her midst.

It wasn’t very long before others joined her path, and now we have the charism and the presence of the Little Sisters of the Poor in Louisville and in so many other places. (Incidentally I learned that the Little Sisters came to Louisville very early in their history – in 1869, about 30 years after their foundation in France.  We are blessed!)  At Jeanne Jugan’s beatification in 1982, Pope John Paul II said that “God could glorify no more humble a servant than she.”

In 2009 Pope Benedict said that Saint Jeanne’s canonization would “show once again how living faith is prodigious in good works, and how sanctity is a healing balm for the wounds of humankind.”  Of course, Pope Francis has called for reaching out to others and has expressed a special concern for the elderly.  The mission of the Little Sisters surely symbolizes his fresh and lively call!

This attractive witness, which is such a clear blend of faith convictions and humble service, caught the attention of our nation this month.  I was not surprised to find that on Monday, January 6, I received invitations to join “Fox and Friends” in the morning and Wolf Blitzer’s CNN “Situation Room” in the late afternoon – all to talk about the Little Sisters. As you might know, they joined with their insurance provider, Christian Brothers, in a lawsuit to avoid being forced to tamper with their charism.  What is obvious to anyone walking in the doors of one of their homes is that the humble service and the zealous faith conviction of these Sisters form two sides of one coin.  If the mandates of the Department of Health and Human Services, which are regulations accompanying the Affordable Care Act, were enforced, the Little Sisters would be forced to pay crippling fines to keep their charism intact.

Understand – the Little Sisters are not against making good health care accessible to all, especially the most vulnerable.   That is precisely their mission! They are against having to make a false choice between serving and following their deeply held beliefs.  They could not in conscience sign a paper that would authorize coverage of objectionable procedures that their faith forbids, such as abortifacient contraceptives and sterilizations, and this struggle led them to take the extraordinary step of filing a lawsuit.  This struggle is not about access to these procedures, but about the Little Sisters being forced to participate in providing them to employees.

Late last week, we learned that the temporary injunction of Supreme Court Justice Sotomayor has been upheld by the entire Supreme Court, and the Little Sisters will continue to be protected from crippling fines while the broader issues are debated and hopefully resolved in favor of a robust defense of religious liberty. While there is no certain outcome, lawsuits filed by other religious organizations also have been given temporary delays, and these are all very hopeful signs.

Serving those in need and worshipping God are joined like the two sides of one coin.  Jesus has told us that what we do to the least, we do to Him.  St. John in his first letter says it also: If you say you love God but do not love your neighbor, you are a liar. The Little Sisters of the Poor provide service inspired by the Gospel that needs to be preserved.  In their work, we see the true worth of religious freedom in our nation.