Saint Thomas More: A Saint For Our Times

Saint Thomas More: A Saint For Our Times

On Sunday, September 30, I visited the Diocese of Covington and delivered a homily at a vespers service to mark the completion of Thomas More University’s 50th Anniversary Celebration. My homily is below:

I rejoice with Bishop Roger Foys and with Acting President Dr. Kathleen Jagger on the 50th anniversary of Thomas More University. Having Thomas More, the 16th century humanist and saint, as a patron defines well the noble path for all who teach and learn on this blessed campus.

The two brief verses from Saint Paul’s 2nd letter to the Thessalonians – likely written less than 20 years after the death and resurrection of Jesus Christ – shapes our meditation in three directions. 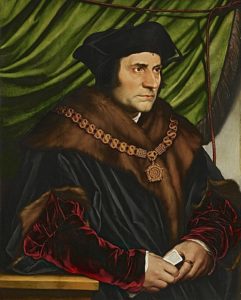 First, Paul says, “We are bound to thank God for you.” The word “bound” in Greek refers to a debt owed.  This is a verb not of personal wish or whim but of duty – a “must” of conscience.  In a book published this year, Inside the Mind of Thomas More: The Witness of His Writings, Louis Karlin and David Oakley write in the book’s conclusion:
“Resignation from England’s highest political office, followed by arrest, imprisonment, forfeiture of a great fortune, and finally execution – what in worldly terms would be a quintessence of failure – were in Thomas More’s life the marks of an extraordinary ethical and spiritual victory.  To paraphrase St. John Paul, because of “the witness which he bore, even at the price of his life, to the primacy of truth over power.”

The Christian gentleman, Thomas More, felt bound to speak to the primacy of truth over power. In our current cultural climate with a penchant to impose one’s will and to shout down opponents, Thomas More gives a path of civility and truth seeking.

Secondly, Saint Paul speaks of the first fruits or greatest results of his preaching. The best brochure for Thomas More University or any Catholic college is the graduate and the virtues that he or she takes into the world.

David Brooks in his 2016 book Road to Character, writes of resumé and eulogy virtues.  Resumé virtues are about promoting self – usually to earn gainful employment. These virtues are necessary but not the deepest of virtues.  Those deeper virtues are eulogy virtues – how others describe you long after you are gone and what you take with you into eternity.  These are the virtues of Thomas More – fidelity, courage, selfless service.

Thirdly, Saint Paul reminds the Thessalonians and us why we have been chosen to receive the first fruits of salvation – that we might achieve the glory of our Lord Jesus Christ and that we might be heaven-bound.

The word “university” has roots in two Latin words:  vertere which means to turn to and uni or one.  A university, rooted in western civilization from 9th century Salerno in medicine and 11th century Bologna in law, has the eager student pursue the deepest of all knowledge – a search for beauty, goodness, truth, and unity – those deepest ends articulated first by Parmenides, Socrates, Plato, and Aristotle and brought into the first universities.

A university that is Catholic turns you, teacher and student alike, in that search for transcendental realities toward God that you might be formed as good citizens of earth and of heaven.  Thomas More, the patron of statesmen and politicians, sought this path and so your university is aptly named as you seek to form and be formed as gentle ladies and gentle men who seek to go out to witness and serve.

Saint John Paul II’s statement when in October of 2000 he declared Thomas More the patron of statesmen and politicians is a proper ending to this homily:

“Precisely because of the witness which he bore, even at the price of his life, to the primacy of truth over power, Saint Thomas More is venerated as an imperishable example of moral integrity.  And even outside the Church, particularly among those with responsibility for the destinies of peoples, he is acknowledged as a source of inspiration for a political system which has as its supreme goal the service of the human person.”