I have celebrated the Holy Eucharist when it was pouring outside the Church, but yesterday in Santo Niño Church, located in Tacloban, the rain poured into the aisles throughout the Mass.  Our team had just come through a downpour in the barangay called Anibong, which is by the sea, and we arrived at the Church where the faithful had gathered for Mass. All through the trip, I have been repeating that we are one church and that our presence is one of a brother and sister in the Lord in partnership with the local church.  During the Holy Eucharist I saw it lived out.

A group of priests and seminarians from the seminary in Palo, as well as a youthful contemporary choir, helped so many of the faithful be joined once again to the one saving act of Jesus Christ, and together we all became one body – the Body of Christ.   The 195-mile hour winds had taken a toll on the church roof and some windows, and the rain poured down the aisles.  It didn’t dampen the spirit of faith and hope, which we found in our 2- hour interaction with the people in this district, who were devastated by the destruction but were never robbed of their family-like hospitality and joy. 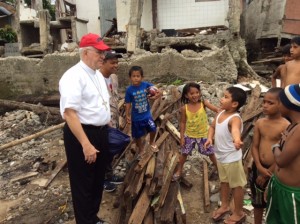 Archbishop Kurtz talks to the children in Tacloban,

All through the Mass, I could not help but bring forth in prayer those Filipino families we spent time with just before coming to the church. As I mentioned, we went to a completely devastated area. You will see photos of the seven large tankers lifted completely out of the water by the 20-foot surge, resting now about a football field from the water’s edge. Slowly, rubble was being removed. Catholic Relief Services (CRS) has worked heroically to help with shelter, water, and human support to those dislocated. Many have now returned and are piecing together homes and community life.

We spoke for at least 20 minutes to the elected captain of this small region of 1,300 or so residents.  We were packed into a concentrated area with children and adults crowding around to hear what was said and to exchange smiles and handshakes. The articulate and caring young woman, Shirley, spoke in a soft voice of the great needs in a very patient, kind but persistent and courageous way. Dennis Sadowski of Catholic News Service captured the interview well and you can read his story here.

This was a scene that teemed with welcome and hope. Like bees, people were using what tools they had to rebuild homes in a make-shift way. It’s not clear that they will be permitted to stay, but this is now their only option. Some even made homes on the ships that had been grounded and would soon be removed. Some were removing rubble, and I was told this is a CRS sponsored “cash for work” project that provides some small return for the work of recovery to those affected. Earlier I had heard that unemployment is now 80% in this affected area and those employed often live on wages of less than a $2 a day.

Like everywhere on the planet, if you want to see signs of hope and joy in the midst of tragedy, look to the children.  In fact, we all enjoyed the children and their reactions. Very warm and friendly, many children spoke, and all waved.  All human beings just want to be noticed and taken into account – it is about human dignity. Two clear signs of dignity for the children were found in a makeshift basketball court that had been erected in the midst of the rubble and a banner announcing the beginning of school last month.

The basketball court must have been 8 by 16 feet at the most with a rickety backboard and rim rescued from the storm, but play has the capacity to restore hope, and we experienced it here. The large banner on a building announced, “School begins on January 14,” which testified to a blessed new routine. I asked some of the children if they are going to school, and of course, they all said yes.  The best sign of normalcy restored in time of tragedy is that return to the routine of school for children and their parents. How moving it is to connect those two scenes – Mass at Santo Niño and life being restored within the seaside rubble.

Pope Francis just released his Lenten message, and it deepens my understanding of what I am experiencing here.  He speaks of Christ’s call to be truly rich and provides the great distinction between being poor and being destitute.  Of course, Jesus calls each of us to embrace a spirit of poverty that leads to a lasting joy centered in God.  The enemy of this path, says Pope Francis, is being destitute, and he outlines three levels of destitution.

The other two levels of destitution are moral and spiritual.  Pope Francis calls us to see the trap of moral destitution, with its modern snares of addictions that turn one to selfishness and sin and, yes, an indignity unworthy of the human person. And the spiritual destitution that robs us of the ability to worship and praise God is a profound affront to human dignity.

My experience in Tacloban yesterday afternoon was a celebration of human dignity.  How fitting and what a privilege it was to visit with families and to join in the Holy Eucharist in a rainy church interior.