Québec, Knights of Columbus, and Our Blessed Mother

Québec, Knights of Columbus, and Our Blessed Mother

At the Knights of Columbus Convention in San Antonio earlier this month, Knights gathered from virtually every corner of the earth and thanked God for a vibrant year. (Our Kentucky delegates, led by State Deputy Bill Schmidt, were there in good numbers and were honored for growth in our state.) Grand Knight Carl Anderson highlighted the year as a time of vibrant growth and great charity – resonating with Pope Francis’ call for tender mercy for all – with astounding numbers of more than 70 million hours of charity and millions of dollars in service to others. 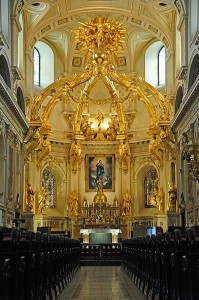 One of the places honored this year was the Cathedral-minor basilica of Notre-Dame de Québec, which is the primal cathedral church of Canada and the seat of the Roman Catholic Archdiocese of Québec, the oldest see in the New World north of Mexico. The year was 1664 when the parish of Notre-Dame de Québec was founded. I am told that before Baltimore was founded as a diocese in 1789, Québec was the see city for the area now known as Kentucky.

At the Convention, I spoke with Québec’s Archbishop Gérald Lacroix, a young and energetic primate for Canada, about the rich history of Catholicism and the tremendous challenges to the Catholic faith experienced in Québec these days.  There has been a terrible decline in active participation of Catholics and an urgent call for the new evangelization.

Thus, most surprising was the growth of the Knights of Columbus in Québec.  Now 20,000 strong, these men and their wives and families are forming a backbone for the new evangelization.  In the midst of the great threats of a secularism that forgets God and faith, Québec now is experiencing a resurgence.  I should not be surprised, for deep within our hearts there is a yearning for the truth and love of Christ – an aching that only His love and His truth can answer.  This is the hope of the new evangelization.

Threats to a vibrant faith and even the religious freedom to practice that faith grow each day.  How painful it is to look at the persecution and violence being carried out against the faithful and the destruction of churches and holy sites in Syria and Egypt.  Closer to home, there is the steady narrowing of religious freedom as something to be kept private and reserved for an hour or so on a day of worship. Sad, too, is the lull into complacency that is so tempting if one reads only headlines or the top stories of the secular media.

In the midst of these challenges, the Knights of Columbus beautifully promoted the image over the main altar in the Cathedral of Notre-Dame de Québec, the painting of the Immaculate Conception.  With framed copies for each state deputy to carry in procession at Mass, this icon is now being carried back to each state by the deputy, so all might be touched by her intercession and faith.  A few years ago, the image of Our Lady of Guadalupe was carried to Kentucky by the Knights and made its rounds throughout our Commonwealth.  (Recently, thanks to the initiative of former State Deputy Rick Arnold, it was presented to Little Way Pregnancy Resource Center where it now resides.)

Pope Francis sent a special message to the Knights of Columbus delegates, highlighting the Convention theme – “Be Protectors of God’s Gifts.” Recalling St. Joseph, on whose solemnity he inaugurated his papal ministry, our Holy Father spoke of protecting the faith. Here are the words of Cardinal Bertone on behalf of Pope Francis: “As protector of the Holy Family, the humble carpenter of Nazareth is a model of the manly virtues of quiet strength, integrity and fidelity which the Knights of Columbus have sought to preserve, cultivate and pass on to new generations of Catholic men. It was in fact as a protective association that your Order was founded in the late nineteenth century, in response to the need to promote the material and spiritual welfare of working men and their families, the dignity of labor and the demands of social justice, and the advancement of the Church’s mission. In fidelity to this founding vision, the Knights continue to play an outstanding role in helping Catholic men to respond to their vocation to be ‘protectors of creation, protectors of God’s plan inscribed in nature, protectors of one another and of the environment’ (Homily, 19 March 2013).”

I could not help but recall Pope Francis’ concluding remarks in his new encyclical, Lumen Fidei, in which he called our Blessed Mother Mary the “good soil” in which faith grows strong and the “perfect icon of faith.”  Just as she intercedes for the Church in Québec, we ask her gentle care over us in the Archdiocese of Louisville, whose Cathedral has as our patron feast the Assumption of our Blessed Mother into heaven.  May she lead us to her Son, Jesus, Who is our power to live as citizens of heaven and earth and to become holy.