I can’t wait for next Wednesday’s Salute dinner to benefit the Catholic Education Foundation and to honor – to salute – exemplary Catholic school grads of the past.  This will be the silver jubilee for this event, and I must begin by recalling with deep gratitude the spade work of Archbishop Kelly and the many leaders whose efforts have borne so much fruit over this past quarter of a century.  The Salute dinner is a very tangible way each year to lift up living examples – witnesses – to the great gift of Catholic education today and stretching back more than 200 years in the Archdiocese. 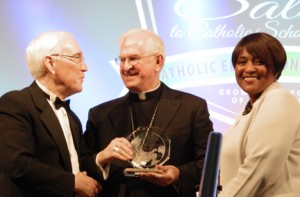 Every year the Salute dinner grows – in numbers, in reputation, and in the amount of money raised for the Foundation. These funds help students in both Catholic schools and parish religious education programs. A major priority is to help families keep a Catholic school education within reach financially.  Make no mistake about it – all families choosing a Catholic school education for their son or daughter make a tremendous sacrifice.  But this family commitment, in time, prayer, and money needs the support of the entire Church.  This year, we are not only building on the track record of the past (which is glorious), but we are stepping it up!

At the dinner, I will proclaim great news.  Today is a new day for our Catholic schools.  I can summarize this “new day” with one word:  MOMENTUM! In November, I announced the wonderful new Catholic school plan that we have been working on for two years. For the details of this new plan, go here or see the series of articles in The Record during November-December of 2014 here.

Through the commitment of all 111 parishes in the Archdiocese and the support of so many donors, the combined efforts for financial tuition assistance will nearly double in this coming school year.  This plan provides great hope for the future of our Church and of the communities in the 24 counties of Central Kentucky that bring us together as one family of faith.

The careful study over the past two years and the very wide consultation throughout the Archdiocese unearthed some facts that we often take for granted.  Every child in Jefferson County lives within 20 minutes of a Catholic school (and likely 2 or 3). Overall, approximately 94% of children in the Archdiocese live within 35 minutes of a school.

The study also revealed widespread support for Catholic schools. When parishioners from every part of the Archdiocese, which stretches from the Ohio River to the Tennessee border, were asked whether they would support making a Catholic school education possible for a needy student, the overwhelmingly positive responses were a welcome surprise. Somehow the call to “give a child a break in life” brings out the best in all of us. Even parishes in which Catholic schools are more distant were very supportive.  For many of us, it is our way of giving back for the good Catholic school education that we experienced.

The focus is clear:  every student deserves the chance of a solid Catholic school education.  As Rich Lechleiter, the new President of the Catholic Education Foundation, states so often, Catholic schools are the best places on earth for faith, family, and learning to come together.  Parents have increasingly recognized that one of the best ways to prepare their children for life (or as I like to say: to become good citizens of heaven and of earth) is through the solid gift of a Catholic school education.

Of course, our Catholic schools exist to further the mission of the Church to proclaim the good news of Jesus Christ to all the nations.  In addition, many others in the broader community assert the benefits of Catholic schools. Employers see good character, discipline, unselfishness, and well-developed skills in graduates of our Catholic schools.  Our schools build future good citizens imbued with a commitment to the common good. For decades, Catholic schools have made a difference both in our Church and in the quality of life in our Commonwealth.

It has been almost two decades since we experienced growth in Catholic school enrollment. Combatting this trend and setting this Archdiocese on a path that is different than most other large dioceses around the country will inspire so many to do so much more.

More than 1,800 will attend the Salute Dinner, including a record number of sponsors who are supporting this biggest dinner ever.  There we will announce again the goal for the school plan: to make a Catholic school education a possibility for more students.  In fact, we have publicly stated our goal of adding 1,000 students to our Catholic elementary schools, and there are already signs of increased enrollment for the coming year.  We have established this goal for a clear reason: to help children and youth develop in God’s image and likeness.

Can we do it?  Can we give our young people a chance? Our simple message: The answer is “YES!”