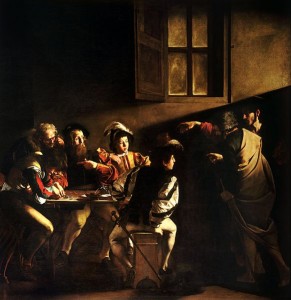 One of my favorite churches in Rome, near the Piazza Navona and the Pantheon, is the French church of St. Louis. Amid the busy streets of Rome, it is very easy to pass this church without a glance, but if you go inside for a visit, you are in for a spiritual treat. My ritual is always the same. I make my way down the right side of the church to the Blessed Sacrament altar near the front, and, after making a prayerful visit to our Lord, I turn to the other side of the church and (more often than not) see a crowd formed. Those gathered, I suspect, include art students who are drawn to the paintings — one of which is the famous painting by Caravaggio of the The Calling of St. Matthew. Most who see it immediately recall two features of this painting that have become famous. The first and most famous feature is the way in which Jesus’ outstretched finger is pointing to the astonished tax collector seated with others nearby. Jesus’ finger proclaims in gesture what we know Jesus pronounced in words: “Come, follow Me.” The other famous feature is the portrayal of the astonished Matthew, soon to be an apostle. Here is the brief passage from the Gospel according to St. Matthew, chapter 9, verses 9-13:

“As Jesus went on from there, He saw a man called Matthew, sitting in the tax collector’s booth; and He said to him, ‘Follow Me!’ And he got up and followed Him.

“Then it happened that as Jesus was reclining at the table in the house, behold, many tax collectors and sinners came and were dining with Jesus and His disciples. When the Pharisees saw this, they said to His disciples, ‘Why is your Teacher eating with the tax collectors and sinners?’ But when Jesus heard this, He said, ‘It is not those who are healthy who need a physician, but those who are sick. But go and learn what this means: ‘I desire compassion, and not sacrifice,’ for I did not come to call the righteous, but sinners.'”

Centuries later, a homily by St. Bede addressed the gaze of Jesus to the publican, St. Matthew. St. Bede uses the Latin phrase, Miserando atque eligendo, to describe the sentiment of Jesus as He calls St. Matthew to “Follow Me.” The Latin can be roughly translated as: “By having mercy, by choosing him” as that sentiment in the heart of Jesus. Pope Francis must be picturing Jesus looking down on him in a similar way, because he has now chosen these words for his papal motto. (He also had previously chosen them for his Episcopal motto.) Vatican Radio gives this background:

This homily, which focuses on divine mercy and is reproduced in the Liturgy of the Hours on the Feast of Saint Matthew, has taken on special significance in the Pope’s life and spiritual journey. In fact it was on the Feast of Saint Matthew in 1953 that a young seventeen year-old Jorge Bergoglio was touched by the mercy of God and felt the call to religious life in the footsteps of Saint Ignatius of Loyola.

Beyond the motto, the coat of arms has a blue field and is surmounted by the mitre and the papal keys. On the crest itself at the centre is the symbol of the Jesuits, a flaming sun with the three letters recalling the name and the salvific mission of Jesus. Underneath we have two more symbols: to the right, the star representing Mary and to the left, the nard flower representing Joseph.

The choice of a name and a motto says a lot about a Pope. In this case, Pope Francis, who began his Petrine Ministry by praying with the faithful in a simple and familiar way and who asked those gathered to pray for him before he imparted his first blessing, seeks to embody the tender mercy of our God made visible in the Lord Jesus. What saint has done more for so many, Catholics and beyond, than St. Francis of Assisi? Humble and generous, St. Francis sought to understand more than be understood and gave away all his possessions to follow Christ completely. Ordained a deacon at the end of his life, St. Francis only wanted to lead others in the way of Jesus Christ and His Church. Pope Francis chose an ideal patron!

For sure, Pope Francis is aware of the need for a bold and tender witness to Christ. The mercy of God touches all hearts, even those who temporarily are turned away. At the Catholic Men’s Conference last Saturday, I spoke about a world without God’s mercy as the three “isms:” secularism, materialism, and individualism. Though the love of God still flows, even for those who do not believe, the strong pull of a world without God on our minds and in our hearts is an ever-present danger. We give this attitude the name secularism.

We are called to replace secularism with no God with a healthy secularity – that is, a proper understanding and love of this world and culture as a way to lead to life everlasting. Without God, secularism leads or includes materialism, which can be simply defined as an attitude of “this is all there is.” Eat, drink and be merry, for tomorrow you die, which sadly leads to loving things and using people rather than loving people and using things. It also leads to individualism — I alone am at the center — an attitude as old as the hills that has never worked well for us. Cardinal Dolan, quoting a mentor, said succinctly that science has taught us that the earth is not the center of the universe, and faith teaches that we are not either!

As I reflect on the transition from Pope emeritus Benedict to Pope Francis, I cannot help but think that the Synod on the New Evangelization in Rome this past October was a gift prepared by Pope Benedict for his successor. As we prepare to walk the steps of Holy Week, now for the first time with Pope Francis, we are aware of the tender mercy of our God, who continues to call. For indeed, each of us can say with St. Bede, “miserando atque eligendo.” “By having mercy, by choosing,” the Lord Jesus says to each of us: “Come, follow Me.”