International Religious Persecution A Century Ago and Today

International Religious Persecution A Century Ago and Today

Last Thursday I arrived at the Washington National Cathedral in D.C. and was so impressed by the sheer majesty of this historic cathedral of the Episcopalian Church.  Set back from Wisconsin Avenue, the soaring, majestic building has been the scene of many national events since its completion in 1907, including a host of state funerals for U.S. presidents. I am told that the funeral services of Presidents Eisenhower, Reagan, and Ford took place here. 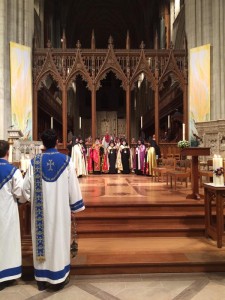 I arrived about 90 minutes early for a 7:00 p.m. memorial service and was amazed to find the crowd stretching all the way to Wisconsin Avenue. By the time the service began, the expansive interior of the Cathedral was teeming with faithful, along with many official representatives of Christian churches and ecclesial communities.

The occasion was a sad one: a gathering of evening prayer for the Holy Martyrs of the Armenian Genocide.  One speaker would call it a “lament.”  Faithful of Armenian descent and many people of good will came to commemorate the tragic deaths of more than one and a half million Armenian faithful from 1915 to 1923. Millions more were displaced.  It was a tragedy about which I had not heard as I was growing up.  Yet for the families who gathered, it was a remembrance that could not be ignored.

Pope Francis has spoken of this great tragedy as the Armenian genocide of 1915.  Decrying this injustice to humanity, he called for a remembrance of the martyrs of the Armenian genocide, saying “…concealing or denying evil is like allowing a wound to keep bleeding without bandaging it.”

I was representing the United States Conference of Catholic Bishops, and there were many other official representatives of the Orthodox Churches, as well as other Christian denominations for this ecumenical gathering.  One of the primary religious speakers was His Holiness Catholicos Karekin II, Supreme Patriarch and Catholicos of All Armenians.  Calling on all to recall our unwavering faith in the reality of Christ’s resurrection, which keeps our hope unshaken, he strongly lamented the great injustices of a century ago to the holy martyrs of the Armenian genocide, as well as the hundreds of thousands of Greeks and Syriac Christians
who also were victimized. As he recalled other crimes against humanity of the 20th century, such as the Jewish Holocaust, the genocides in Cambodia, Rwanda, and elsewhere, he then spoke of the present.

He rightly reminded those assembled of  “…the terror, violation of human rights, mass murder, and ethnic cleansings.  In the Middle East, and especially in Syria and Iraq, unspeakable tragedies are taking place. Christians are being martyred for their faith, and holy places are being destroyed.”

Too often we read headlines of the cruel treatment of Christians and others, who are given a choice between renouncing their faith or leaving, or, even worse, murder.  This memorial service brought the plight of a century ago to the forefront for prayer, solidarity, and action for those being persecuted today.

In addition to solidarity and prayer, the service called for action in the area of international law to defend those who are being persecuted for their faith.  I recalled some recent actions that have been taken.  At the November Plenary meeting of the U.S. Bishops in Baltimore, Bishop Gregory Mansour, Eparch of St. Maron of  Brooklyn, led a holy hour and spoke of  the plight of the international religious persecutions.  In answer to a call for a collection to help fleeing Christians last September, more than $6 million in aid has been raised by the generosity of Catholics throughout the nation.

In addition, there is a bill in the Congress right now – the Frank Wolf International Religious Freedom Act of 2015 – that is an important first step in improving the ability of our nation to advance religious freedom globally.  Go here to the web site of the United States Conference of Catholic Bishops to find out more. Steps are being taken but so much more needs to be done.

May our closing prayer to conclude the Memorial Service for the Holy Martyrs of the Armenian Genocide, guide us all:

Christ our God, you crown your saints with triumph, and you do the will of all who fear you, looking after your creatures with love and kindness.  Hear us from your holy and heavenly realm by the intercession of the Holy Mother of God and by the prayers of all your saints, especially the holy martyrs who gave their lives during the Armenian Genocide for faith and for the homeland, who we commemorate today. Hear us Lord, and show us your mercy.  Forgive, cancel and pardon our sins.  Make us worthy thankfully to glorify you with the Father and with the Holy Spirit.  Now and always and unto the ages of ages. Amen.