Imparting the Breath of Life

Imparting the Breath of Life

The month of January is one in which we recall in a special way the gift of human life and the need to protect life from its destruction through abortion.  This is because of the January 22, 1973 anniversary of the Supreme Court decision Roe v. Wade, which legalized abortion in the United States.  This month, we also remembered the dignity of human life as we observe Poverty Awareness Month during January (see here ), as we recalled the fight against the sin of racism led by Dr. Martin Luther King, Jr., and as we reflected on the plight of migrants during National Migration Week. When this column appears, I will be making a pastoral visit on behalf of the USCCB to Vietnam to continue the efforts among episcopal conferences to strengthen relationships worldwide and to build that culture of encounter that is an important foundation for all of our efforts to promote human dignity.

Because January 22 this year falls on a Sunday, Monday, January 23 was designated by the Church as the Day of Prayer for the Legal Protection of Unborn Children.  Since 1973, more than 56 million abortions have been completed, testifying to the tragedy of what our Holy Father Pope Francis calls a “throwaway culture.”  Thus, this day is observed as a particular day of prayer for the full restoration of the legal guarantee of the right to life and of penance for violations to the dignity of the human person committed through acts of abortion.  However, Catholics are invited, whenever possible throughout the year, to engage in the penitential practices of praying, fasting, and giving alms to end abortion in our nation. 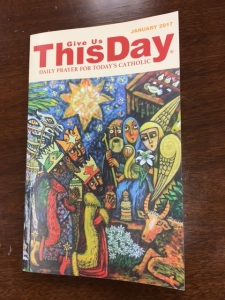 I was asked to write a reflection for this day for the January 2017 publication of Give us This Day. Below is what I wrote:

“You alone have the power to impart the breath of life as you form each of us in our mother’s womb.” This opening prayer on the January 23 Day of Prayer for the Legal Protection of Unborn Children exalts God’s power and helps me to fathom God’s care for me long before I saw my mother’s smile for the first time.  The more I exalt in divine love for me “from the womb,” the greater I become a protector of some of the most vulnerable in our society—the child in danger and the mom and family needing my compassion and help.

Aware that my life is touched by the precious blood of Jesus shed for all, as today’s first reading from Hebrews recalls, I am moved to pray for those most hurting.  As Jesus looks and sees the precious gift of human life, let my eyes see what he sees.

It seems that prayer, even the most private, moves the heart to action in the world. My first public action, a letter to the editor, was written in January of 1973, about nine months into my life as a priest, and it expressed my deep concern about protecting the child in the womb after Roe v. Wade.  This is the 44th year that I have prayed to be a protector, humble and yet bold—walking with a mother so in need as to consider not giving birth.  Today, I pledge to protect life and cultivate a culture of life as I respectfully walk with all, born and unborn. I praise the One who imparts the breath of life.

(Text of reflection reprinted with permission. Give Us This Day: Daily Prayer for Today’s Catholic, January 2017