How Pope Francis Inspires My Ministry

How Pope Francis Inspires My Ministry 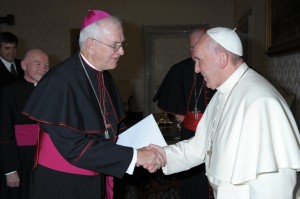 Archbishop Kurtz greets Pope Francis at the meeting with the leaders of the United States Conference of Catholic Bishops on October 7. (Photo courtesy of L’Osservatore Romano)

After I met Pope Francis during the USCCB curial visits to the Holy See last October, I remarked to others that if I were choosing a parish based upon the pastor, he would be my pastor.  Now, he is the world’s pastor. During this past year, Pope Francis provides inspiration in so many ways:

As a Catholic, I am excited as I hear positive feedback from other Catholics and those of other faith traditions.  I am proud that Pope Francis has given a new voice to the Church’s rich heritage of Catholic social teaching as he speaks of a Church for the poor and as he calls us to promote the dignity of the person from conception to natural death, to support families, and to reach out to those on the margins.  In challenging a culture of indifference, what he calls a “throw-away” society, Pope Francis speaks as though the vulnerable, poor, and forgotten are members of his own family – as indeed they are.

I join with Catholics and all people of good will in thanking Pope Francis for being a true pastor and shepherd during this first year of his papacy.  My prayers are with him as he continues to serve Christ and His Church.