On Saturday, June 22, I had the privilege of presiding at a Mass and dinner honoring 150 years of the ministry of the Little Sisters of the Poor who arrived in Louisville in 1869. I have long admired these women who have done so much to serve those who are elderly and poor in our community.  I want to share with you below the wonderful talk from the Provincial of the Little Sisters, Mother Provincial Maria Christine Lynch, LSP. Also if you haven’t seen it, I conducted an interview with the local superior, Mother Paul Magyar, LSP on my television show Conversations with Archbishop Kurtz. 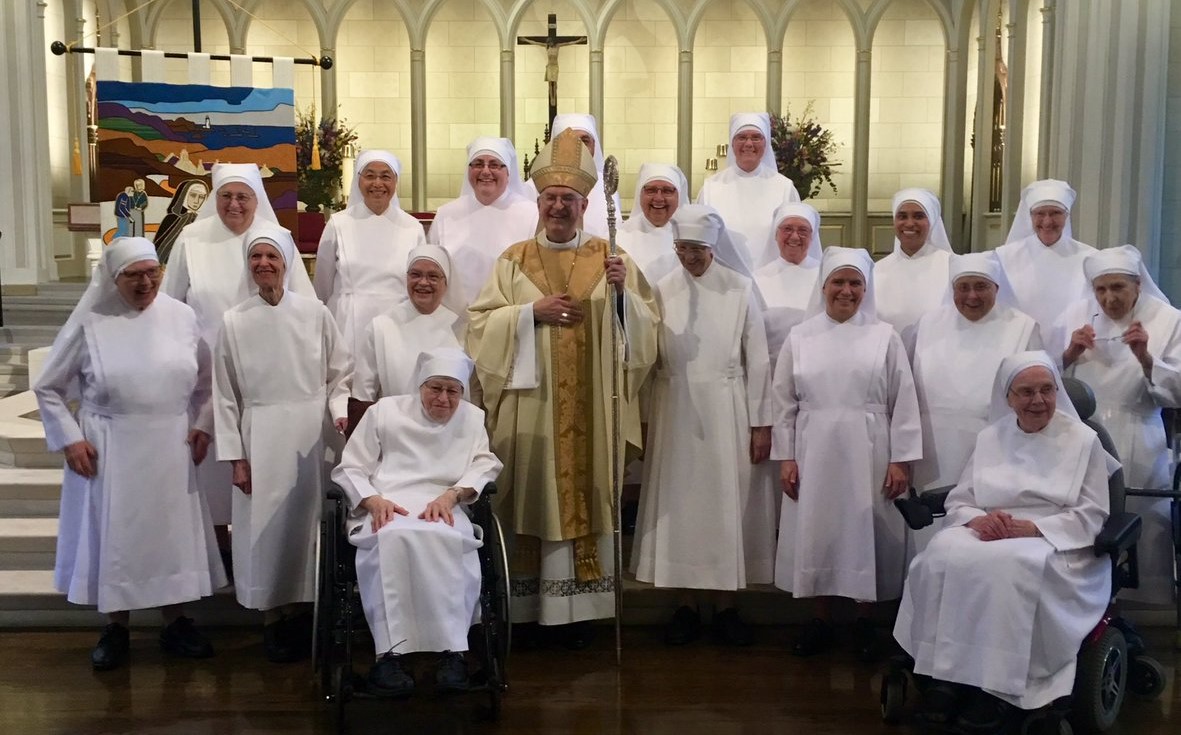 Archbishop Kurtz at the Cathedral honoring the Little Sisters of the Poor who came to Louisville in 1869.

Little Sisters of the Poor
Mass for the 150th anniversary in Louisville
June 22, 2019
Remarks of Mother Provincial Maria Christine Lynch

To Archbishop Kurtz our principal celebrant and to an immense circle of cherished friends along with our beloved Residents – those with us now and those who are with us in spirit, we say…. THANK YOU one and all for sharing not only this special anniversary of our community’s 150 years in Louisville but sharing in so many of our joys and sorrows all along the years of this journey.  THANK YOU also for allowing the Little Sisters to share as well in your joys and sorrows.  You are here today because of that friendship and the memories that unite us. What more beautiful way to express our gratitude to God for these memories than through the Liturgy in which we just participated!

Allow me also to offer a special word of thanks to Very Rev. Michael T. Wimsatt, pastor and to Maggie Cyphers who has coordinated so many details for today’s Liturgy and reception.  The Cathedral musicians and choir were exceptional, wouldn’t you agree?

Our gratitude would not be complete without a few words from our Superior General in France who has sent a message that I am happy to read and which conveys her closeness with us on this happy occasion.

We cannot really appreciate the significance of today’s celebration without a brief glance back to 1868 and 1869.  There would be no circle of friends today if it had not taken shape back when the first seven Little Sisters left our motherhouse in Brittany, France on a mission to expand our still young Congregation beyond Europe to the shores of North America. Their destination was Brooklyn, New York.   Just twelve months later on September 22, 1869 another group of young Little Sisters would come west to Kentucky to begin the seventh of thirteen foundations in the USA within only four years.  The circle was growing and becoming stronger.

The historical importance of Bardstown in the westward migration and expansion of Catholicism is well documented.  When our Sisters arrived in Louisville in 1869, they were true pioneers — they had traveled over 4,000 miles — first on a French iron steamship that would sink five years later, and then inland by train until they passed through the doors of a small house which had been given them by Bishop McCloskey.  It was only fitting that St. Joseph be chosen as the patron and protector of our mission here — after all, he was the patron of Bardstown’s Proto-Cathedral as well as of your Archdiocese.  Yes, we can say that St. Joseph remains the ‘go-to’ intercessor for our circle of friends in Louisville!

But, who did the Sisters turn to in those early days?  The first Sisters to arrive in Brooklyn from the Motherhouse spoke French, German, Flemish and, thankfully there were two from Ireland who spoke English.  None had ever been to America and they had no idea what to expect. There were no Little Sister vocations yet from North America.  Who showed the Sisters where to go and how to establish their collecting route?   It was local parishioners and neighbors like all of you, Catholic and non-Catholic alike … and kind parish priests and religious communities, who helped the Little Sisters get established.

We know that in those years following the Civil War, conditions for the poor, especially the elderly poor, were deplorable. Disease was rampant.  And where were the elderly? Many were begging on bustling street corners, others were forgotten by those who couldn’t support them and still others found themselves alone after losing sons and daughters in the Civil War.

Yes, the elderly in America needed the Little Sisters.  And the Little Sisters needed friends who would help them learn the American ways, help them acquire lodging, bedding, food, medical attention, the consolation of the sacraments and so much more for their elderly poor.

This is how the Little Sisters’ circle of friends took off in every country and city, thanks to the example of our Mother Foundress who herself spontaneously tapped the love and goodness in people’s hearts.  Saint Jeanne Jugan adored Jesus in the Eucharist and from there she found Him in others.  Her spirit of gratitude drew its source in the Body and Blood of Christ and was expressed in charity.   This is why the feast of Most Holy Body and Blood of Christ was so well chosen for this celebration.

We feel very much a part of this City and the surrounding towns … and of course we are at home in the family of the Archdiocese. The presence of so many here in diverse roles — like our wonderful Knights of Columbus and members of St. Joseph’s Home Lay Advisory Board — and indeed everyone who supports us daily in our mission of caring for the elderly — all of you make a powerful statement of the esteem you hold for older persons and the mission of strengthening one another in charity.