Francis: The World is His Parish

Francis: The World is His Parish 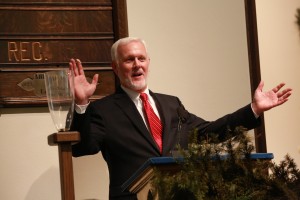 Dr. Dwight Moody, Founder and President of the Academy of Preachers

I have known Dr. Dwight Moody, a friend and Baptist minister, since shortly after I came to Louisville as Archbishop almost 8 years ago.  Together with Fr. Martin Linebach, I became involved with the Academy of Preachers, which Dwight founded and leads, and its annual festival for young preachers.  Dwight and I have become friends in faith who have great respect for one another.

While he was in Rome last week, Dwight wrote of this experience from the square in front of St. Peter’s Basilica.  I thought you would enjoy:

No, it was not a papal audience, as they call it, but with at least 50,000 of my closest friends I stood in Vatican Square and listened as Francis delivered his weekly homily. It was all in Italian (I presume) so I did not understand a word of it; neither did many other people standing for an hour under that warm Mediterranean sun.

Francis did not preach for an hour: only 15 minutes, and some of that was a series of greetings to special groups in the vast audience, school or church groups from different parts of the world, and they clapped and waved their brightly-colored banners when Francis named them and pronounced upon them a blessing.

Thousands of people, of course, did understand the sermon and clapped at appropriate times. I like it when people clap during a sermon; it is akin to the older tradition to saying “amen” when the preacher says something important, true, and powerful. Some sermons, including many I myself have preached, are therefore not “clap worthy;”  they are predictable, safe, and rather dull. But not Francis. His sermons bloom from the only two seeds that really matter to the Christian preacher: the heart of the gospel and the hope of the people, which is why people pay attention to what he says.

It is amazing, is it not, that week after week, multiple thousands of people from all over the world gather in this Roman square, turn their heads towards the sixth floor window (second from the right), and strain their eyes to see the small figure who stands at the window with a microphone and speaks for a quarter hour. That is all that happens: no choirs, no liturgy, no testimonies, no production, no entertainment–just one man and the spoken word. It reminds us that when preachers have something to say that is rooted in gospel, responsive to what is going on in the world, and unencumbered by ambition, agenda, or anger, people will take notice, especially when the message is consistent with the public ministry of the preacher.

Yes, I stood in Vatican square and saw the Pope and listened to his sermon. But I also scanned the crowd of people, even spoke to those around me: from Spain, Austria, Germany, many Asian and African countries, and of course, the United States.  He is a celebrity, all right, this Pope of Rome, and we were all there to attest to that. But he is also a preacher, and his pattern of preaching, both public and parish, is an inspiration for all who aspire to follow the call by which God has directed our lives: to preach the unsearchable riches of Jesus Christ to the people of the world. Red and yellow, black and white, all are precious in His sight; and all have a right to hear the story of Jesus, whether it comes from a world-class celebrity like Pope Francis of Rome or some ordinary proclaimer like you or me.

I went to Rome last month and saw the Pope, and it has made me a better person and a more thankful preacher of the Christian gospel.