Forty-Two Years of Standing Up for Life

Forty-Two Years of Standing Up for Life

I am in Washington DC for another January March for Life! My public action on this issue began 42 years ago in January 1973, when I was ordained a priest just 10 months. At that time, I wrote a letter to the editor of Allentown’s Morning Call newspaper decrying Roe versus Wade, the Supreme Court decision that made the taking of innocent life in the womb permitted by the law of the land.  I joined with so many in opposing this decision and standing up to defend and protect innocent life.

I would go on to receive my degree in social work and spend two dozen years in Catholic Charities working for programs such as “Caring Hearts” in which good people – professionals and volunteers – worked tirelessly to help women who experienced problems with their pregnancies to stand together for life – for the child in the womb and for the mother and father and families.  This combination of public action and advocacy combined with direct service and care for those in need is what it means to be pro life!

It sure has been a long road.  Once again tomorrow, I will celebrate Mass and stand on the platform in the DC Mall and offer a prayer for this cause…now 42 years old. 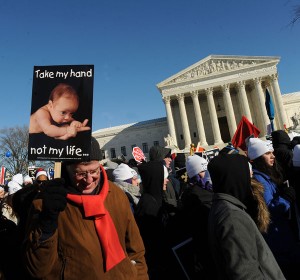 A man holds a poster outside the U.S. Supreme Court during last year’s March for Life in Washington. (CNS file/Leslie Kossoff)

Standing up for life definitely takes patience, endurance, and commitment.  Tomorrow’s Mass at 7:30 a.m. will close an overnight vigil at the National Shrine of the Immaculate Conception. The large Basilica will be teeming with young people (and young at heart, like me!) who have spent the entire night in vigil and prayer.  Then I will go to the Verizon Center where 20,000+ youth will gather for Mass for Life. (Thankfully, 300+ from Louisville will be in that blessed gathering!).  We will process from that Mass to the Rally and March on the Mall.  Peacefully and politely, bravely and compassionately, thousands upon thousands of faithful will be there – some for the first time ever and others for the 42nd time. We will be filled with joy, expectation, and hope.  We will be ambassadors for life!

On that first Easter evening, it was Jesus, risen from the dead, who came to his disciples and said, “Peace be with you,” and then breathed on them the power of the Holy Spirit.  It is this encounter with Jesus that Pope Francis says should be our source of strength and confidence as we seek to do what is right in a way filled with mercy and compassion.

Last week I spent four days in Haiti. Next week’s edition of The Record will provide details of this pilgrimage of hope – coming 5 years after the earthquake that devastated this island in the Caribbean.  Much turmoil and suffering remains.  But slowly and surely, the Haitian people who stood through this calamity work for a restoration of dignity. Schools and hospitals are being rebuilt, and partnerships of good people are making a difference.  It would have been easy to get discouraged.  So much needs to be done.

In many ways, the March for Life tomorrow and the journey to Haiti last week emerge as chapters in the same narrative: the working of Christ’s grace that lifts up fallen humanity to restore dignity, protect life, and work in the hearts of good people to call forth actions that are compassionate and caring, brave and faithful.

Dr. Jérôme Lejeune, the French doctor and geneticist who in 1959 discovered the genetic composition of Down syndrome (trisomy 29), died in 1994 and has been declared a “Servant of God.” (This is the first step toward canonization in the Catholic Church).  He suffered much in his defense of the voiceless.  Once he declared that we and our civilization will be judged by one and only one criterion:  How did we treat the least of our brothers and sisters? These words of Jesus empower us to be respecters of all human life!