No one likely sets out in life to practice heroic virtue.  Even the most fervent among us seeks to live a happy life founded on virtuous living or an adventurous and interesting life or perhaps both.  But it is hard to imagine that the heroic, which necessarily includes a love that is sacrificial, is present at the outset.

During the Easter Season, we read so many adventures of the early church and especially of St. Peter and St. Paul.  Their activities in the early church constantly reflected the heroic.  Humble and yet courageous, these saints encountered endless ways to witness to Jesus.  This witness always seemed to end with some a heroic, sacrificial action through which the Church flourished and grew. 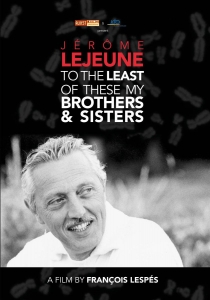 In every age, God calls forth heroic, sacrificial and saintly lives and the example of Dr. Jérôme Lejeune is no exception.  I just finished reading the fascinating bio of his life, written by his daughter Clara (Life is a Blessing: A Biography of Jérôme Lejeune Geneticist Doctor Father) and viewed an hour-long video of his life.  His life is one to come to know and imitate.

He was only 67 when he died on Easter of 1994 and surprisingly, given his achievements, was relatively little known.  His greatest public action was the discovery in 1959 of the genetic cause of what was then called “mongolism” and now is called Down syndrome.  Before his discovery, it was thought that people born with this syndrome had a disease, were a punishment to the parents, and should be kept in the shadows of society.

Dr. Lejeune discovered that instead of the usual 23 pairs of chromosomes making up the genetic package of most humans, the child with Down syndrome had an extra one on the 21st pair (thus the name trisomy 21). One reason he may not be well known is that he called it syndrome trisomy 21 rather than Lejeune syndrome – a subtle act of humility.

His biography reveals the development of a good person, not particularly heroic, but one with a spirit of adventure.  A letter to his wife-to-be shortly before their marriage gave a hint of the heroic adventure to come: “If you agree to live this precarious but just and wholesome life, I am sure we can succeed!”

What made Dr. Lejeune’s life heroic was that combination of courage and family values.  He would spend his mornings meeting and interacting with so many children with Down syndrome and their families and then used the afternoons for his research.  He came to see the humanity of each person he met.  (He called his patients “the disinherited.”)

Rather than simply use his scientific brain to fuel accomplishments and achievements, Dr. Lejeune asked the question of heroes:  because I can do something, ought I to do it?

That question made him aware that his scientific discovery could be misused.  In 1969 while being honored in San Francisco, he publicly decried the possibility that some may want to take the life of a child with Down syndrome before that child was born.  His research made it clear to him that the genetic package of a human was set from conception or, as he paraphrased the prologue of the Gospel according to St. John, “In the beginning there is a message, and this message is in life, and this message is life. And if the message is a human message, then the life is a human life.”

Dr. Lejeune continued on despite great opposition from the professional community for his defense of human life; he lost government contracts in France and some say the chance of a Nobel Prize. He did so because, as he would repeat, “One phrase, one only, dictates our conduct, the expression of Jesus himself: ‘Whatever you do to one of the least of my brothers, you do it to me.’” (Mt. 25:40)

Thirty-three days before his death, he began serving as St. John Paul II’s appointed president of the Pontifical Academy of Life. Today the Jérôme Lejeune Foundation in Philadelphia promotes the defense of children with Down syndrome, and his cause for canonization moves forward; he is now recognized as a Servant of God.  May Jérôme, a father, doctor, geneticist, be in heaven interceding for all, most especially the least of us.

With Good Shepherd Sunday coming, it is good to witness to a lay vocation that is truly heroic.

The  video about Dr. Lejeune can be ordered at www.LejeuneUSA.org/DVD