Below is the homily I delivered this past Sunday (April 8, 2018) at the National Shrine of the Divine Mercy in Stockbridge, Massachusetts. You also can view the video of my homily at the Shrine here.

I extend special greeting to the Provincial Superior of the Marians of the Immaculate Conception of the Blessed Virgin Mary, Father Kazimierz Chwalek, and the Shrine Rector, Father Anthony Gramlich.  We thank the Marians, founded in 1670 by Saint Stanislaus Papczynski and renewed in 1910 by Blessed George Matulaitis, for providing this National Shrine of Divine Mercy.  Today, we offer special prayers of praise through the intercession of Saint John Paul II, who in 2000 canonized Saint Maria Faustina and designated the 2nd Sunday of Easter to be Divine Mercy Sunday. Saint John Paul II died on the eve of this feast in 2005.

Rejoice with me! Rejoice in the mercy of God coming into our hearts through our redemption in Jesus Christ!  Alleluia! 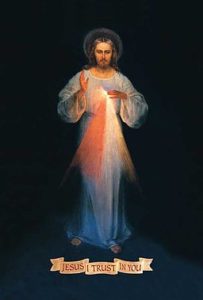 The fullness of Easter joy is captured by a vivid description of Easter as the eighth day of creation.  In the book of Genesis, we read that God created the entire splendor that surrounds us in six days, and on the seventh day, He rested. The eighth day of creation refers to the resurrection of Jesus Christ. In the rising of Jesus from the dead, the world experiences the first day of a new creation. In 2000, Saint John Paul II designated the second Sunday of Easter, which is the eighth and final day of the Easter Octave, as Divine Mercy Sunday. When he did so, he used an expression filled with great significance. He called Divine Mercy “the hermeneutical crown of the final day of creation.”

Hermeneutics is the science of interpretation. If you want to understand the richness and background in studying sacred scripture, the science of hermeneutics will allow you to delve deeply.  Thus, when John Paul II called Divine Mercy the hermeneutical crown of the final day of creation, he was telling us that the Divine Mercy of God is the key to understanding the joy of Easter.

Let us consider the very life of God himself. When the love of the triune God, Father, Son, and Holy Spirit reaches frail and sinful humanity, that love takes the form of mercy. Like a drop of water from the heavens that reaches the ground and becomes dew in the morning mist, so God‘s love for His creation touches our frail, sinful hearts and His love takes the form of mercy – the mercy for which our hearts yearn.

Today’s gospel scene provides insight into this great mystery of the Divine Love.  On the first Easter Sunday evening, Jesus comes in the midst of His disciples, whom he finds frightened and ashamed behind a lock door.  A riddle from Chinese lore asks: if you want to reach someone, do you teach, tell a story, or offer a greeting? The answer: you first offer a greeting. Without your greeting being received, no story or teaching will bear fruit. So Jesus gives His greeting in one word: peace. Shalom. That one word is so rich with meaning. It means to be made whole and be one with your God, with one another, and within yourself.  Be at peace.

There was a time in Eastern Europe in which there was no peace. Travel back with me to the 1930s, and you will find a world full of fear. With the cruelty of Nazi German growing and atheistic communism in the Soviet Union on the rise, fear and suspicion abounded. With two forces of godlessness on the rise, it is not surprising that a lone voice from an unsuspecting place would be given by God as a counter sign to that fear, shame, and mistrust. It would be a sign of God‘s mercy.

The voice was that of a contemplative woman religious, and her diary remains to tell her story so simply and so powerfully. On October 5, 1938, a young religious by the name of Sister Maria Faustina, baptized Helen Kowalska, died in a convent of the Congregation of the Sisters of Our Lady of Mercy in Kraków, Poland. She came from a very poor family that had struggled on their little farm during the terrible years of World War I. Sister Maria Faustina had only three years of  a very simple education. Hers were the humblest of tasks in the convent, usually in the kitchen, tending the vegetable garden or answering the door.

On February 22, 1931, our Lord and Savior Jesus Christ appeared to this simple nun, bringing with Him a wonderful message of mercy for all mankind. Saint Faustina tells us in her diary under this date: “In the evening, when I was in my cell, I became aware of the Lord Jesus clothed in a white garment. One hand was raised in blessing, the other was touching the garment at the breast. From the opening of the garment at the breast here came forth two large rays, one red and the other pale. In silence I gazed intently on the Lord; my soul was overwhelmed with fear, but also with great joy. After a while Jesus said to me, ‘paint an image according to the pattern you see, with the following inscription: Jesus, I trust in you.’”  She was firm in her determination to follow the instructions. Even after her failure to put paint to canvas successfully, she was able to direct an artist and even in her simple faith, to correct the artist when he did not get it right.

The painting is that magnetic image of our Lord Jesus from Whose Sacred Heart flows blessings depicted in rays of light. It is that image that countless millions of believers view as they pray at three o’clock in the afternoon each day to His Father: “Eternal Father, I offer You the Body and Blood, Soul and Divinity of Your dearly beloved son, our Lord Jesus Christ, in atonement for our sins and those of the whole world.”  Notice that in this prayer we do not simply ask for atonement for my sins or for your sins but rather for our sins. Together we come to the Father in our frailty and ask for mercy. Someone told me recently, “I want to go to heaven but I do not want to go alone! I want you to come with me!” What a beautiful way to describe our destiny in heaven as we travel united in Christ Jesus and under the mantle of His Divine Mercy. This prayer is then completed by countless people who pray in litany fashion with their eyes on the Sacred Wounds of Jesus, “For the sake of His sorrowful passion, have mercy on us and on the whole world.”

This beautiful devotion to Divine Mercy and the chaplet prayers continue to draw countless thousands of people to the mercy of God each day.  Let me tell you a story that happened to me just two months ago. A wonderful friend and coworker by the name of Bruce Crawford died at the age of 48. Bruce was a loving man. Each day I witnessed his generous personality, but I did not ever know the source of his strength. It was only after his dear mother died that he gave witness to his faith at her funeral.  He spoke of his habit of praying the Divine Mercy chaplet with his mother each day at three o’clock, often over the telephone. She had led him to that beautiful devotion that drew him close to Jesus, his merciful Savior and close to his dear mother. He told us that the night before the Mass of Christian Burial, he had publicly led the Divine Mercy chaplet at the funeral home. Little did Bruce suspect that just two weeks after his mother’s death, the Lord would call him home to Himself. God‘s mercy surrounded Bruce in this life and, I feel sure in faith, ushered him into eternal glory on what was for him the eighth day of creation.

As we witness to this eighth day of creation in the resurrection of Jesus, walk with Saint Thomas who appears so prominently in today’s gospel.  Over the centuries Saint Thomas has been given that terrible nickname “doubting Thomas.”  Yet the gospel passage shows us that after he touched the very wounds in Jesus’ hands and touched the wounded side of Jesus, Saint Thomas uttered  in just five words what perhaps is the deepest expression of faith known in history: “ My Lord and my God!”

It is with Saint Thomas that you and I today approach the throne of God’s mercy. There are two major sins in every age. They are the sins of presumption and of despair. We might say that the person in despair says,” I am so bad that I don’t think even God could possibly forgive me for my sins.” Contrast that to the person who sins by presumption and says, “I am so good that I cannot believe that God would not want me to be with him in heaven!”  In many ways, on the surface, we might say that we live in an age of presumption in which people very quickly presume their own goodness and overlook any sin or frailty. However when we begin to go beneath the surface and touch the hearts of people who suffer from their sins and feelings, we understand that this age also may well be an age of deep despair. It is an age that thirsts for and yearns for the mercy of God. It is this deep desire that leads us to the throne of God‘s mercy.

Saint John in his first letter speaks of blood and water, the rays of red and pale radiating from the Sacred Heart of Jesus. We know that in baptism by water we are claimed by God’s mercy once and forever and in the Precious Body and Blood of Jesus at every Holy Eucharist, we are fed by our merciful Savior.

Now some mistakenly would like to separate mercy and truth. They would like to say one can have love without justice or show mercy without truth. In the second reading, however, Saint John says it very clearly: “In this way we know we love the children of God, when we love God and obey his commands.” The tender mercy of God will always lead us to a conversion of heart. Jesus in the Gospels always first called the frail sinner to Himself and comforted and forgave him.  In the end, He also sent him forth with the gentle but firm reminder: “Now go and sin no more.”  It is not an accident that the devotion of Divine Mercy is intimately connected with the great Sacrament of Reconciliation. Indeed, it is in confession that you and I experience most clearly and most significantly the great mercy of God. It is also no accident that the world is attracted to the example of Pope Francis, who often takes time to hear confessions.  Even more popular is the photo taken of him kneeling humbly to receive the mercy of God in the Sacrament of Reconciliation. God‘s mercy endures forever!