Hard as it is to believe, this coming Sunday begins the holiest week of the year: Holy Week.  I can already anticipate the darkened skies on Holy Saturday night, the new fire that will light the paschal candle, and the deacon chanting: “Christ our Light.”  So many throughout the Archdiocese have been preparing for this special time.  Through the Rite of Christian Initiation of Adults, more than  400 hundred individuals, accompanied by their sponsors and teams, have been praying and studying their faith – awaiting either baptism or the profession of faith to mark their continued conversion as members of the Catholic Church.  I can’t wait for Holy Saturday at the Cathedral.  It is always a highlight of my year.

Christ our Light!  That theme has been with me in two special ways over the last two weeks.  First, I made a trip to Mexico to further a reciprocal relationship that is being established between the Archdiocese of Leon and our own Archdiocese.  Spurred by the pastoral desire to provide for the many Latino brothers and sisters throughout the Archdiocese, and with the support of our Priests’ Council, I approached Archbishop Alfonso Cortes of Leon in November, with a kind introduction from Archbishop Jose Gomez of Los Angeles, in the hope that a mutual and long-lasting pastoral relationship might be established.  Then, Frs. Jeff Shooner and Bill Bowling visited the Archdiocese of Leon early this year to begin the process of establishing this relationship. 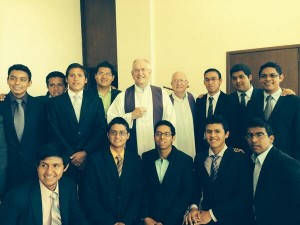 Seminarians in Leon, Mexico welcome us for Mass at Cristo Rey shrine high on mountain in Guanajuato.

Our hope is that the wonderful pastoral work of our priests, deacons, sisters, and lay leaders in Hispanic ministry might continue to grow and flourish with the help of priests from Leon, and that, in turn, we might contribute to the development of ministry in Leon.  Fifteen years ago an agreement between the U.S. Bishops and the Bishops of Mexico urged such cooperation for the pastoral care of recent immigrants to the United States from Latin America.  I will keep you updated about the progress of this promising relationship and our hope to welcome two priests from Leon to minister in our Archdiocese, as we also explore ways to be present in Leon.

I learned much about the Archdiocese of Leon, which is located in the state of Guanajuato in central Mexico.  I had been there eight years ago to ordain a priest from a diocese near Leon (Irapuato) for service in East Tennessee.  The highlight of the trip was a pilgrimage and Mass at the shrine of Cristo Rey, high on a mountain top that is in the very center of Mexico.  (There is another such statue in Brazil with the same name.)  There are two crowns that dominate the shrine – the heavenly crown of Christ reigning as our king in heaven and the crown of thorns, which we will soon painfully recall on Good Friday. As the noon sun shined brightly on that mountain top, and I looked over the vista, I could not help but recall the words “Christ our Light.”

Guanajuato is very famous in the history of Mexico and in the history of the Catholic Church.  You can find in nearby Queretaro the site of the Cross of Christ at which baptisms occurred as early as 1531 – the same year in which our Lady of Guadalupe first appeared to St. Juan Diego. It was from Guanajuato that Father Hidalgo raised the banner of La Virgen de Guadalupe for the cause of independence in 1810.  Not surprisingly, this area is called the “cuna (cradle) de civilizacion” in Mexico.

Then last week I traveled to Chicago for the Lumen Christi (Light of Christ) Institute on Catholic social teachings and the economy.  Learned scholars from throughout the U.S. reflected on this important theme, especially in light of Pope Francis’s encyclical, Evangelii Gaudium, in which he wrote so passionately about the Light of Christ touching the lives of all, especially the poorest among us, and the need to highlight the primacy of the human person when promoting a just economy.  Pope Francis states it well in Evangelii Gaudium: “The current financial crisis can make us overlook the fact that it originated in a profound human crisis: the denial of the primacy of the human person!”

Founded in 1997 by Catholic Scholars at the University of Chicago, The Lumen Christi Institute describes its goals as: “bringing together thoughtful Catholics and others interested in the Catholic tradition and making available to them the wisdom of the Catholic spiritual, intellectual, and cultural traditions.”  It sees itself as leaven in developing future leaders better educated and formed in Catholic faith and thought.

At this conference, the intimate bond between faith and reason emerged strongly. In his encyclical Fides et Ratio, Blessed John Paul II attests to that bond and rejects the false divide, often implied today, when we are encouraged to choose between being faith-filled or rational. This conference was a great example of the compatibility of faith and reason and faith and science.

As we prepare for Holy Week, let us walk the final steps of Jesus before his death and resurrection and proclaim in our voices and in our hearts: “Christ, our Light!”