Catholic Schools Have a Future

Catholic Schools Have a Future

Below is an article I wrote about the strong future for Catholic schools in the Archdiocese of Louisville that originally appeared on Our Sunday Visitor’s OSV Newsweekly website. OSV Newsweekly provides timely coverage of important national and international religious events reported from a Catholic perspective. 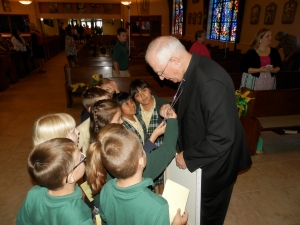 Archbishop Kurtz with students at St. Rita School. St. Rita has increased its overall enrollment as well as its enrollment of Hispanic students over the last two years.

At one point, I thought Catholic schools were a thing of the past — an extremely precious gift but a gift that was diminishing rapidly. I no longer believe that. Let me explain why.

I am familiar with school closings. In 1955, my parish school closed. I had just finished third grade in a small school with one classroom for the first three grades; we moved to the next of three aisles in the classroom each year. Despite those early challenges, however, I was very aware of the gift of Catholic schools.

When I think back to that small classroom at St. Mary School in Mahanoy City, Pennsylvania, and the total of 22 years of Catholic school (including seminary), I remember how we were formed by high standards in a very personal way. To this day, my seventh grade teacher, Grey Nun of the Sacred Heart Sister Mary Denis, writes regularly to encourage me on the right path.

My classmates and I received a great academic foundation as well as solid moral principles grounded in our Catholic faith. Most of all we met the person of Jesus Christ in and through his Church, which profoundly affected my character and my growth in holiness.

In Louisville, many others have shared similar experiences. Take John Lechleiter, now CEO of Eli Lilly & Company. In 1959, he entered first grade in St. Stephen Martyr School, the first of nine Lechleiter children to do so in their primarily blue collar, working-class neighborhood.

After completing high school at Louisville’s St. Xavier, an undergraduate degrees at Xavier University in Cincinnati and master’s and doctorate degrees as a National Science Foundation Fellow at Harvard University, John began his career at Lilly in 1979 as an organic chemist. He is now the first scientist to lead the company since the Lillys themselves, who were trained as pharmacists.