On Sunday, October 8, I consecrated the Archdiocese of Louisville to the Immaculate Heart of Mary.  Below is my letter of explanation, accompanied by a fine pastoral letter from Bishop Johnston, which explains well the meaning of “consecration.”  During this month of October, in which we pray the Rosary, let Mary, our Mother, lead us to her Son, Jesus.

The Feast of the Nativity of the Blessed Virgin Mary

Dear Clergy, Women and Men Religious, and Lay Faithful of the Archdiocese of Louisville, 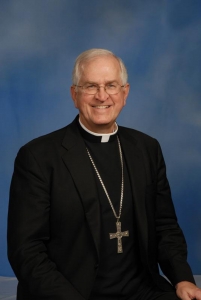 I am happy to commend to you this pastoral letter On the Consecration to the Immaculate Heart of Mary from my good friend, Bishop James Vann Johnston, Jr., of the Diocese of Kansas City – St. Joseph. Bishop Johnston spoke to our priests and seminarians at the Presbyteral Assembly in June on the theme, “The Priest as Leader.” In a sense, through the distribution of this pastoral letter, he now speaks to all of us on the theme, “The Blessed Mother as Leader,” as the one who is always leading us to her Son, our Lord, Jesus Christ. This has added significance in this very important centennial anniversary year of our Blessed Mother’s appearances and messages to three shepherd children, Jacinta, Francisco, and Lucia, at Fatima, Portugal in 1917.

When he was the bishop of the Diocese of Springfield-Cape Girardeau, Bishop Johnston issued this letter to prepare his flock to celebrate the Solemnity of the Annunciation on March 25, 2010, and their special consecration to the Immaculate Heart of Mary. Although Bishop Johnston’s fine words were written to the people of the Church of Southern Missouri, I believe they speak with equal fruitfulness to the people of the Church of Central Kentucky. I am grateful for the kind permission of Bishop Edward M. Rice, the current Bishop of Springfield – Cape Girardeau, to distribute this pastoral letter to all of you, along with this note of commendation.

As you know, we have been celebrating the Fatima Centennial this year with great festivity throughout the Archdiocese of Louisville. We began with a Mass, Solemn Rosary, and crowning of a statue of Our Lady of Fatima on her feast day, May 13, at the Cathedral of the Assumption. I am still moved by the memory of so many people of the diverse cultures of our Archdiocese gathered together with one heart filled with devotion to our Blessed Mother. Who can forget the continual stream of flowers that were brought forward and collected around the feet of the Fatima statue?

Following this, there have been local celebrations at parishes throughout the Archdiocese on the 13th of the months of May through October, coinciding with the dates that Our Lady appeared in Fatima 100 years ago. This has created a momentum of devotion that will culminate next month in a special anniversary celebration of the 66th Annual Living Rosary on October 8, at 2:30 p.m.at Trinity High School. Notably, this is the same week and month of the final 1917 apparition at Fatima and the famous “Miracle of the Sun.”

At the Living Rosary, following the example of St. John Paul II who consecrated the world to the Immaculate Heart of Mary on March 25, 1984, I will join my sentiment to that of so many of my brother bishops and consecrate the Archdiocese of Louisville to the same Immaculate Heart. Please prayerfully read the attached pastoral letter, both to prepare your heart beforehand and, afterwards, to ponder its meaning and significance. Mary has taught us (see Luke 2:51) that this pondering is necessary for the continued fruitfulness of our devotions.

At her June apparition, Our Lady said to Lucia, “Jesus wishes you to make me known and loved on earth. He wishes also for you to establish devotion in the world to my Immaculate Heart.” Mary went on to say, “my Immaculate Heart will be your comfort and the way which will lead you to God.” I believe this consecration is a beautiful form of the devotion that Jesus asked for. It is a devotion that He knew that we needed in order to find the way to the Father. Jesus is the Way. Mary helps us find the Way.

Bishop Johnston explains that consecration primarily means “to make sacred, and it is something only God can do.” But, when we allow ourselves to be set apart, “belonging to the Lord in a new way,” we make a “consecratory response.” Mary is “the prototype of a consecratory response.” By consecrating the Archdiocese of Louisville to the Immaculate Heart of Mary, “we are drawn into union with

[the Sacred Heart of Jesus] in a singular and certain way” because these Two Hearts are so attuned to one another. This consecration will help each of us, in our various states in life and vocations, to grow in holiness, in fruitfulness, and in security against the evil one, the devil, who causes so many “tumultuous times.” Pope Francis likewise encouraged us at his own celebration on May 13 in Fatima when he canonized Saint Francisco and Saint Jacinta: “We need but take refuge under the protection of the Virgin Mary and to ask her, as the Salve Regina teaches: ‘show unto us… Jesus.’”

With this consecration, we also commend our own goals, efforts, and petitions to Mary so that she may present them to our Heavenly Father in the most pleasing and acceptable way, a way which he certainly cannot refuse! In his letter, when Bishop Johnston commends “our families,” “the new evangelization,” and “the lives of the poor” to Mary, we can’t help but be reminded of the discernment that so many have generously committed to in response to my pastoral letter, Your Parish: The Body of Christ Alive in Our Midst.

Since that letter was issued on December 30, 2016, the Feast of the Holy Family, parishes throughout our Archdiocese have been discerning how the Lord is calling us to minister to all of our brothers and sisters in the three areas of family life, education and lifelong formation, and service and outreach. “Under her mantle,” Pope Francis said on May 13, “they are not lost.” And I share the Holy Father’s conviction, as he went on to say:

[F]rom her embrace will come the hope and the peace that they require, and that I implore for all my brothers and sisters in baptism and in our human family, especially the sick and the disabled, prisoners and the unemployed, the poor and the abandoned.  Dear brothers and sisters, let us pray to God with the hope that others will hear us; and let us speak to others with the certainty that God will help us.

I am grateful to Bishop Johnston, the Archdiocesan Marian Committee, and the participants of this year’s Living Rosary for helping us to give and receive the embrace of Mary in a very special way.

Sincerely yours in our Lord,