Response on the 50th Anniversary of Dr. Martin Luther King Jr.’s Letter from the Birmingham Jail

Response on the 50th Anniversary of Dr. Martin Luther King Jr.’s Letter from the Birmingham Jail

Peace be with you! It is an honor to join my remarks with those of Rev. Jim Wallis and U.S. Representative John Lewis on this august occasion and to join with Rev. Bernice King, daughter of Dr. King, whose presence honors this two-day event.

Letters deserve a response, and in fact, some demand one. Such is the letter that we gather to remember. Fifty years ago in this city of Birmingham, Dr. Martin Luther King Jr. sent a letter, actually a reply to one that he had received from religious leaders at the time. Making use of the edges of newspapers and stubs of pencils available to him in the jail, Reverend King set out what has become a classic letter, quoting from Socrates to St. Paul and St. Augustine to St. Thomas Aquinas. This letter, which is rich in foundations of scripture and human philosophy, direct, and prophetic, gave a rationale for strong action as well as marching orders for the steps we must follow to lift us, as the letter states, “from the quicksand of racial injustice to the solid rock of human dignity.” Rightly, he uncovered the words of St. Thomas Aquinas that the unjust law is “the human law that is not rooted in eternal law and natural law” and so is, as Dr. King says, “out of harmony with the moral law.” 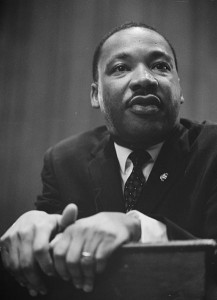 Though at that time I was only 16 and taking my seminary entrance examination in my home state of Pennsylvania, I can look back to his response to religious leaders of that day, who had cautioned him against action that they claimed was “unwise and untimely.” We now see clearly his response as true wisdom, whose time had long since come.

Such a letter deserves a response …

Such a response, of course, needs to be in writing and in living witness.

It surely is in writing. Later that year on August 23, 1963, a statement on racial harmony was issued by the Administrative Board of the National Catholic Welfare Conference. Here are some words from that statement: “We must insist that the heart of the race question is moral and religious … Discrimination based on the accidental fact of race or color, and as such injurious to human rights, regardless of personal qualities or achievements, cannot be reconciled with the truth that God has created all men with equal rights and equal dignity” (On Racial Harmony n. 2).

Even stronger words were to come. In 1979, the U.S. Catholic Bishops issued Brothers and Sisters to Us: U.S. Catholic Bishops’ Pastoral Letter on Racism, which was meant to shape the hearts, consciences, and actions of the Catholic faithful and all people of good will. What was said? “Racism is a sin: a sin that divides the human family, blots out the image of God among specific members of that family, and violates the fundamental human dignity of those called to be children of the same Father. Racism is the sin that says some human beings are inherently superior and others essentially inferior because of race” (3).

Then, twenty years later in 1998, two of my brother bishops spoke publicly against racism still at work. Bishop Curtis J. Guillory, now of Beaumont, Texas, rightly declared: “In the minds of many, tolerance is the goal in racial relations. However, for Christians and Catholics in particular, the goal goes beyond to the deeper level of actual reconciliation.” He further condemns a tolerance that means “…accommodation, existing at a comfortable distance, or co-existing with the other” and calls for a change of heart to match the changes of laws. How reminiscent is this understanding of Dr. King’s words, for he knew that laws written on the human heart are deeper and more binding than laws in the halls of legislators. These words of Bishop Guillory were echoed by another brother bishop, Joseph Perry of Chicago, who added: “Ultimately our Christian faith is about building bridges between people, not walls.”

Today we give thanks for these written and spoken words. This day is possible because of the initiative of Christian Churches Together in the USA, or CCT. Though CCT was begun officially in 2006, I recall Cardinal Keeler of Baltimore speaking of its merits back in 2001. Such a convening of historic Protestant, Orthodox, Catholic, African American, and Evangelical/Pentecostal families forms the family of CCT. Thanks, Bishop Dennis Madden, for serving as the President from the Catholic family, and thanks for this highly symbolic occasion for the churches to formally and publicly respond to the letter of Dr. King.

Though very personal, our commitment to our brothers and sisters can never be private. For sure, any change of law without a matched change of heart will not bring lasting change, but such a change of heart cries out to be proclaimed and recognized publicly as each of us commits personally. During this Easter season we are in good company, for in the Acts of the Apostles, we hear of St. Peter and the first apostles speaking and acting words and actions whose legacy continues to this present age in Dr. King’s letter.

Of course, such writing is essential but not enough. Thus, this gathering allows not simply a response in writing but also one given in living witness. Our living witness has three elements. Thus today, we must ask forgiveness for past wrongs, be grateful for words that have already borne fruit, and be resolved for more action.

First, imperfect as we are, we speak in sorrow asking the Lord our God for forgiveness of past sins of racism, especially those that linger consciously or subconsciously in the present, and for any lingering temptation to judge not by the content of character but by the color of skin. Our prayers to the Lord our God must be earnest and sincere.

Secondly, we give thanks for gains that we have witnessed in this half century. It behooves us in this 24-hour period to be specific in our recollection and our gratitude. I recall two specific events, both in my home city of Louisville. On Saturday, March 2, there was a wonderful banquet to honor African American Catholic Leaders. Each year, now for more than a quarter century, adults and young adults are recognized. I can’t wait each year to hear not only who will be honored but the words of witness each gives. Our youth, our present and future, especially inspire. Their witness is unique, and yet each invariably touches in very personal ways on three themes: family, education, and faith. They give testimony to their families, and this is fitting because we know that lasting change for the better most often flows from the strong and faithful family. How much Dr. King testified to this need, for the content of character is born and nurtured in the strong family. Thus, they give thanks for the mothers and grandmothers, the fathers and grandfathers.

The young being honored invariably speak of their education – their schools, some public and others Catholic – all giving witness in their poise and articulation – of an education so essential if they are to uncover and use their God-given gifts. Then there are invariably words of faith. How energizing and reassuring are their words of faith … words that would have given Dr. King cause for rejoicing. I dare say that such public witness would not have been possible a century ago, and we give thanks.

The second event occurred on Good Friday. At an outdoor and public witness of the Stations of the Cross for Justice in our world, the 14th station called for an end to violence in our city. Speaking eloquently was a young lady, only 10 years old, who recovered from being shot to the head in an act of senseless violence when she was only two years old. Her story was well documented a few years ago on DatelineNBC. Combating violence in our cities and our homes requires the strong and steady, fiercely- convicted, and stubbornly-held non-violence of Dr. Martin Luther King, Jr. This young lady, Erica Hughes, gave testimony with a voice only 10 years old that such efforts are essential and worth every sacrifice.

This living witness tells of a rich legacy – one of non-violent action. While violence surrounded Dr. King’s life, he proclaimed in word and deed the direction of his Savior, Jesus Christ – namely, that injustice must not be ignored, but neither can violence be addressed and eliminated by greater acts of violence. Erica Hughes and youth like her deserve a safe life where violence does not reign.

Of course, sorrow for the past and gratitude for the present will be empty words unless matched by a clear resolve to continue the work at hand. Fifty years ago, Rev. King Jr. was cautioned not to do anything unwise or untimely. Indeed, his actions and our actions this day not only reflect wisdom, both natural and supernatural, but also action whose time has long since come. Listen again to the final words of Rev. King’s fifty-year-old letter: “Let us all hope that the dark clouds of racial prejudice will soon pass away and the deep fog of misunderstanding will be lifted from our fear-drenched communities, and in some not too distant tomorrow the radiant stars of love and brotherhood will shine over our great nation with all their scintillating beauty.” We hear and heed these words with great hope, and we pray