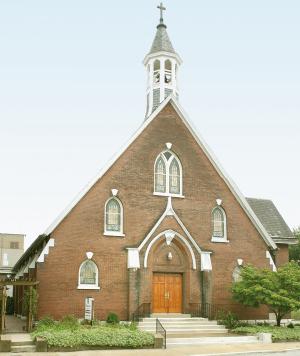 A year after its 1901 founding, St. William Community was described in The Record as being “a young but thriving parish in a heavily settled district, and will soon become, with God’s help, a great power for good.” In 1902 Bishop William G. McCloskey laid the cornerstone for its Norman-Gothic edifice, with a wood-beam ceiling, on the corner of 13th and Oak Streets. Father Denis Murphy was the first pastor. A school was in operation immediately, staffed by the Sisters of Mercy from 1903 to 1962 and housed in a new building in 1951. The school closed in 1962.

With membership down to eighty-five by 1962, St. William nearly closed. However, the Second Vatican Council (1962-65) reenergized liturgical participation and social justice concerns. Membership rose. New Directions Housing Corporation, St. William Neighborhood Center (now GuardiaCare), and other outreach activities developed, some housed in the former school building. In the mid 1980s, St. William developed a sister-parish relationship with Our Lord of Esquipulas in Nicaragua, then a tie with Casa Materna, housing mothers with high-risk pregnancies. In 1990, Just Creations was launched to support artisans in developing countries. Renting space to Dismas Charities as a minimum-security prison created a prison ministry. In 2000, CrossRoads Ministry opened to offer young Catholics a prayerful retreat experience of justice and peacemaking, and the St. Vincent de Paul Conference was reestablished.

Committed to peace-making, St. William publicly opposed the Vietnam and Iraq wars and offered sanctuary to Central American refugees in the 1980s. The parish supports many organizations that improve the lives of people in need.

The parish’s decision to use inclusive language and its mission statement call the 300-plus parishioners to be challenging voices: “We commit ourselves…to serve the poor and oppressed far and near and to eliminate the causes of violence and injustice. We open our hearts and our doors to all people and hold in high esteem God’s creative diversity.”