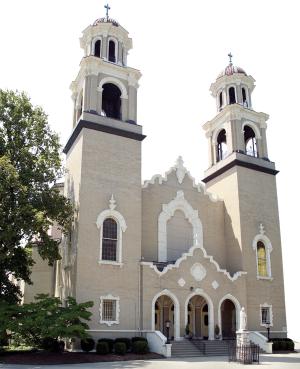 Saint Therese Church began in 1906 as Holy Trinity Parish. With its German-born founding pastor, Father John Peter Berresheim, the new parish provided a spiritual home for the second- and third-generation German-Americans moving to the outskirts of Louisville.

Initially there were no buildings to accommodate parish needs. In a private home, the parish opened a school, staffed by the Ursuline Sisters of Louisville. The owners moved out during the day while school was in session. Construction of a combination school and church was already underway, and the new building opened in 1907 with classrooms on the second floor, the church on the first floor, and a social activities space in the basement. Dedicated in 1908, the entire structure was later converted to a school building.

The parish and school grew, requiring additional space. Construction of a new church began in 1927. It was dedicated the same year. Because there were two churches named Holy Trinity, then-pastor Father Andrew Zoeller requested that the new church be named in honor of the newly canonized Carmelite Sister, Saint Therese of Lisieux, popularly known as “The Little Flower.” The church was remodeled in 1968 with a centered stone altar surrounded by seats. The innovative design was controversial but served as a model for the renovation of other churches after the Second Vatican Council.

Through its hospitality and liturgy, the parish continues to be the cornerstone of stability as the Germantown neighborhood develops.