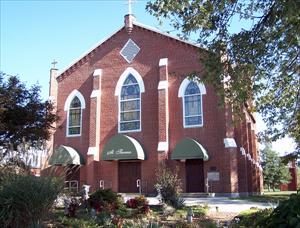 St. Theresa Church in Rhodelia is the oldest Catholic church in Meade County, where Catholic settlers began arriving in the late 1700s. Traveling missionaries said Mass in the pioneers’ log homes (called stations). The first recorded visit was in 1805.

Devoted Catholics built a log church called St. Theresa in 1818 on the banks of the Ohio River in Breckinridge County. Local baptismal records start in 1824. The congregation relocated in 1826 to a more central site in Meade County, closer to most parishioners’ homes. There, they constructed a second log church, recalled by a large wooden cross in the “old cemetery.” Many baptisms, first communions, and confirmations are recorded from Bishop Benedict Joseph Flaget’s visit in 1827. St. Theresa’s congregation was the largest in Meade and Hardin counties when Father Charles Ignatius Coomes was assigned to these missions in 1830. Here he located his headquarters, becoming the first resident pastor.

Parishioners supplied materials and labor, constructing the present church under the direction of William Kelly, architect of the Cathedral of the Assumption. In use by summer 1857, it was dedicated June 16, 1861 by Bishop Martin John Spalding. The parish added the “new cemetery,” a parish hall, the present rectory, and a new school in the twentieth century.

Today, the parishioners of St. Theresa, numbering about 500, share much common history and, like their ancestors, a strong sense of ownership for their parish.