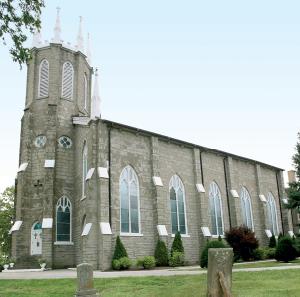 With its majestic octagonal tower and inspiring stained-glass windows, St. Rose Proto-Priory and Church has served Springfield for 200 years. Established in 1806, the proto-priory remains the oldest Dominican religious house in the country. Its Tudor-Gothic church, built the same year, is the oldest standing structure west of the Alleghenies still in use as a church. Named in honor of the Third Order Dominican Saint Rose of Lima, it began as a sister parish of St. Ann. After St. Ann closed several decades later, St. Rose became the area’s only Catholic church.

The first leader of the newly-formed Dominican province of St. Joseph, Father Edward Fenwick, O.P. (eventually bishop of Cincinnati), organized the Dominican venture at St. Rose and purchased the property for the parish. Father Samuel Thomas Wilson, O.P., was the first pastor.

The Dominican friars founded a college—the first Catholic educational institution west of the Alleghenies—for boys and young men in 1808 or 1809. Dedicated to Saint Thomas Aquinas, it flourished for several decades. Among its distinguished alumni was Jefferson Davis, President of the Confederacy.

The growing Catholic population needed a larger church. Dedicated in 1855, the new church was an expansion of the original building, which now comprises the sanctuary, between the tabernacle and the new altar. A larger priory was constructed in 1867 to accommodate the addition of a seminary. The old priory remained intact until both priory buildings were demolished in 1978 and replaced by an eight-bedroom priory. Until 1956, when the seminary moved, seminarians worked the 600-acre farm on the complex. The farm ceased operation in 1978.

A parish school operated from 1951 until 1968. The school building is still used for many purposes, including a Head Start program, wedding receptions, family reunions, and the annual autumn turkey supper, which serves about 3,100 people. Today 650 parishioners count St. Rose as their spiritual home.