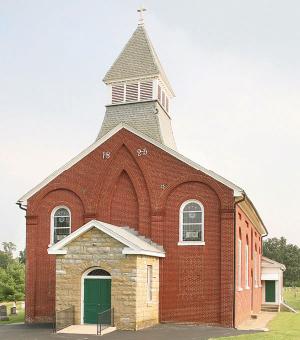 Holy Cross, known as the birthplace of Catholicism in Kentucky, was established in 1785, when “a league” of sixty Catholic families was formed in Maryland. Each pledged to migrate to Kentucky and agreed to settle in the same area for mutual support, to increase their chances of having a priest, and to establish a church.

In 1787, Mass was held in private homes. Under Father William DeRohan, the first chapel was built at Holy Cross. A grotto today marks where this structure, the first west of the Alleghenies for Catholic worship, was built.

Father Stephen Badin, the “Apostle of Kentucky” and the first priest ordained in the United States, came to Kentucky in 1793 and cared for the entire state from Holy Cross. From the fall of 1822 to the spring of 1824, Belgian Father Charles Nerinckx served Holy Cross. In 1823, the present brick church was built. Father Robert Byrne, a local boy, became pastor and remained at Holy Cross for twenty years.

Father Edward Lynch built the first frame school in 1880. In 1914, three Ursuline Sisters of Mount St. Joseph arrived. A convent was built, and the school was enlarged. The Ursulines stayed until 1976.

In 1958, fire destroyed the two-story frame school that had at one time housed a grade and high school. Two weeks later plans were underway to replace the school with a brick structure. The church celebrated its 150th anniversary in 1935 with descendants of many of the original settlers present. At the 200th anniversary celebration on September 15, 1985, more than 1,000 people attended. In 1995 Holy Cross was clustered with St. Francis of Assisi in St. Francis, Kentucky under one pastor.

The approximately 400 parishioners of Holy Cross today are as hardy as their ancestors, continuing to take pride in the community and help one another in good times and bad.