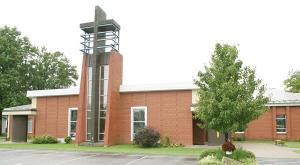 30 minutes before Saturday and Sunday Masses or by appointment

In October 2008, Blessed Teresa of Calcutta was formed from the merger of parishes Saint Jerome (Fairdale) and Saint Mary (Hillview) Parishes. The overriding parish mission is the worship of God through the Mass and sacraments and outreach to the poor in the parish geography. Parishioners serve those who are poor through food distribution in cooperation with Dare to Care, including Christmas baskets.  In addition the parish provides softball leagues, basketball opportunities for young adults, weekly and seasonal help to the recovering through Alcoholics Anonymous, and monthly “Senior Sage” luncheons. Though smaller than either of the two parishes that merged to form Saint Teresa of Calcutta, the 225 active families continue to make Fairdale and Hillview a community that God and Mother Teresa would have been proud of.

Saint Jerome
A dream came true for the Catholic people of the Fairdale area in July 1953. They had petitioned Archbishop John A. Floersh for a parish, and their wish had been granted. Father Martin J. Moore was named pastor; he offered Mass in the former Fairdale Public School Auditorium.

With a little money saved, in a year’s time the men of Saint Jerome decided to construct their own building. Parishioner Charlie Siemens drew the plans on wrapping paper in his hardware store. The concrete block structure would include an apartment as a rectory. When the parishioners and Father Moore had completed their work, the first Mass was offered in the new church on Easter 1955.

By November 1956, the school had been built. It opened with 208 pupils, taught by the Sisters of Loretto. Eight students made up the first graduating class in June 1957. The convent, constructed in 1959, and the present rectory, built in 1962, were the last buildings constructed by the men of the parish. On June 16, 1968, ground was broken for the present church and the gymnasium, dedicated by Archbishop Thomas J. McDonough in 1969. In 1977, the Ursuline Sisters of Louisville joined the school after the Sisters of Loretto were assigned elsewhere. Though two additional classrooms expanded the school in 1977-79, declining enrollment and financial problems led to its closing in 1991, a heavy blow to the parish. The parish renovated the church and rededicated it in 2002.

Saint Jerome began as a labor of love. Its rural community of almost 900 parishioners is warm and welcoming. For more than a decade, Saint Jerome has shared its pastor with another parish, currently St. Mary, and the parishioners have continued their commitment to responsible lay leadership. They reach out through a witness of faith and through the ministries of the Saint Vincent de Paul Society and the Fairdale Area Community Ministry.

Saint Mary
Saint Mary Catholic Church in Hillview was established by Archbishop Thomas J. McDonough on June 15, 1968, to meet the needs of the growing Catholic population in northern Bullitt County. The congregation worshiped in various sites until Christmas Midnight Mass of 1969, the first Mass in its own spiritual home. This multi-purpose building for worship, education, and other church functions was blessed by Archbishop McDonough in April 1970. This style of parish center was something of an experiment among Catholics at the time. Father Kenneth Kamber was the first pastor.

A strong religious education program, involving volunteer catechists, took shape under the leadership of the Sisters of Charity of Nazareth, then the Ursuline Sisters of Louisville. An addition to the building in 1976 accommodated the expanding program. This addition and other improvements were funded largely through an annual picnic, drawing in many local people. Mobilized by the Saint Vincent de Paul Society, the parish became a center of assistance for Central Kentucky victims of tornadoes in May 1996, including many of its own members.

As a mark of changing times in the organization of parish life, Saint Mary and Saint Elizabeth Ann Seton were clustered under one pastor from 1995 to 2005. In June 2005, Saint Mary and Saint Jerome became a cluster. A child development center was opened in 2001 to serve the broader community and to generate extra parish income. It exemplified the parish’s willingness to try new ideas. After five years of service, the center became financially unsustainable and was closed in 2006.

Saint Mary’s 700 parishioners, many of whom are transplants from other parishes, face the challenges of the future with an honest spirit and remain a close-knit family.