The Faith Channel is an interfaith religious cable television ministry. Established in 1987, this unique channel was made possible through a generous grant from the Mary and Barry Bingham Sr. fund. The Faith Channel is operated by the unique partnership of the Roman Catholic Archdiocese of Louisville, The Baptist Consortium and the Louisville interfaith community. 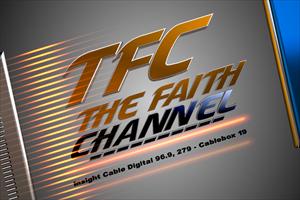 Mass of the Air

The guiding mission of The Faith Channel is to:
♦ Communicate diverse religious beliefs to the community.
♦ Provide wholesome family entertainment.
♦ Provide a vehicle to share the vitality of the faith communities.
♦ Raise the moral and ethical consciousness of the community.

The Faith Channel is committed to high-quality, value-guided programming that respects the diversity of its members and will not accept programming that:
♦ Engages in proselytizing.
♦ Attacks or demeans other religions or religious traditions.
♦ Engages in on-air solicitation of funds for a particular congregation or religious body.
♦ Endorses political candidates or parties.

The Faith Channel is considered a model for interfaith cooperation in religious and family-based television.