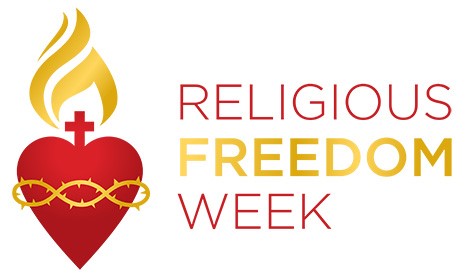 The theme for this year is Strength in Hope. It is taken from the Second Vatican Council’s Decree on the Apostolate of the Laity:

“In the pilgrimage of this life, hidden with Christ in God and free from enslavement to wealth, they aspire to those riches which remain forever and generously dedicate themselves wholly to the advancement of the kingdom of God and to the reform and improvement of the temporal order in a Christian spirit. Among the trials of this life they find strength in hope, convinced that ‘the sufferings of the present time are not worthy to be compared with the glory to come that will be revealed in us’” (Rom. 8:18).
–Apostolicam actuositatem, 4

“Religious freedom remains one of America’s most precious possessions. And, as my brothers, the United States Bishops, have reminded us, all are called to be vigilant, precisely as good citizens, to preserve and defend that freedom from everything that would threaten or compromise it.” – Pope Francis

A special “Religious Freedom Mass” will be held in Louisville on Wednesday, July 3, 5:00 p.m. at the Little Sisters of the Poor (15 Audubon Plaza Drive, Louisville, KY 40217).

During Religious Freedom Week, Catholics are encouraged to pray and act each day for religious freedom. The Pray-Reflect-Act series aims to help Catholics build solidarity with people of faith who are persecuted abroad and find strength to carry out the mission of the Church here in the United States.

Social media downloads with the prayer intention for each day of Religious Freedom Week are available. Please distribute these materials through your channels where appropriate.